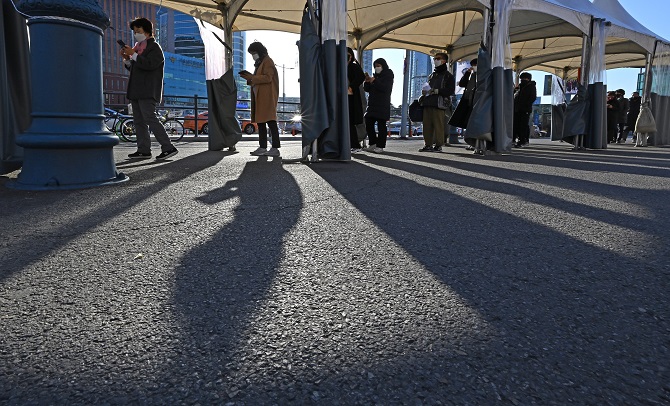 People stand in line to take coronavirus tests at a screening clinic in front of Seoul Station on Nov. 26, 2021. South Korea’s new coronavirus cases stayed below 4,000 for the second straight day, but critical cases rose to a record high amid worries the virus could quickly spread under eased social distancing rules. (Yonhap)

SEOUL, Nov. 30 (Korea Bizwire) — South Korea’s new coronavirus cases stayed below 4,000 for the third straight day Tuesday, but the number of critically ill patients hit a fresh high amid concerns over the global spread of the new virus variant.

The country reported 3,032 new COVID-19 cases, including 3,003 local infections, raising the total caseload to 447,230, according to the Korea Disease Control and Prevention Agency (KDCA). The country reported the highest daily cases of 4,115 to date on Nov. 24.

South Korea added 44 more deaths from COVID-19 on Tuesday, raising the death toll to 3,624. The fatality rate stood at 0.81 percent.

A child under the age of 10 has died from COVID-19 in the first death among children.

The child had an existing medical condition and was confirmed to have been infected with the coronavirus in a postmortem test, KDCA spokesperson Koh Jae-young said in a briefing, without providing any further details on the child.

Health authorities are currently tracing the path of the infection and will conduct an analysis to determine the exact cause of the child’s death.

The emerging omicron variant across the globe has put South Korea on high alert, prompting the authorities to put a ban on foreign arrivals from eight African countries to block the inflow of the potentially more contagious variant.

Health authorities have conducted a whole-genome sequencing test on a couple who recently arrived in South Korea from Nigeria and the couple’s acquaintance.

They tested positive for COVID-19. Tests were under way to establish if they have contracted the omicron variant.

The authorities expected the results to be announced after 9 p.m. Wednesday. 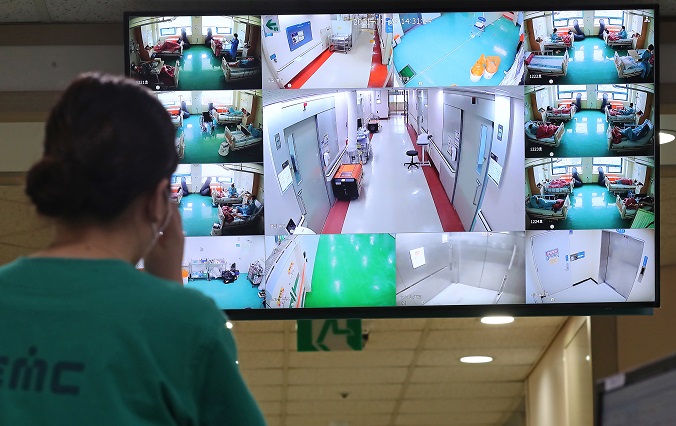 Medical workers look at a monitor showing the fully-occupied intensive care unit for COVID-19 patients of a university hospital in Daejeon, 164 kilometers south of Seoul, on Nov. 29, 2021, making the clinic no longer able to house more of such patients. (Yonhap)

The authorities also said they have been analyzing 60 samples of foreign arrivals since Friday to determine whether they were infected with the new COVID-19 variant.

Genome sequencing on the samples of arrivals from Germany and the Netherlands who have tested positive for the coronavirus has yet to be completed, the authorities said, adding the result will be announced this weekend.

Germany and the Netherlands have reported omicron variant cases.

On Monday, the government decided to halt the further easing of social distancing rules as health authorities continue to grapple with a rise in daily cases.

The KDCA said the pandemic risk level, a new five-tier assessment system introduced last week to evaluate the degree of COVID-19 risk, has reached the highest level in the country’s capital area.

Health officials said it has become impossible to move on to the second phase of the country’s ambitious scheme to gradually return to normal life.

South Korea had originally planned to further relax the virus curbs in mid-December after four weeks of the first-phase easing of distancing rules.

The KDCA also decided to speed up the administration of booster shots and secure more hospital beds over the next four weeks.

The bed occupancy rate in intensive care units for COVID-19 patients stood at 91 percent in Seoul and 88.5 percent in the greater Seoul region as of Tuesday. The figure for the country as a whole came to 78.5 percent.

The health authorities earlier said 75 percent of bed occupancy is a critical threshold. 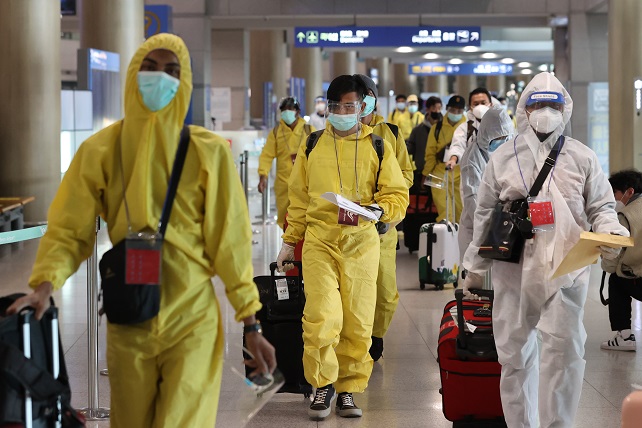 Passengers wearing protective gear arrive at Incheon airport, west of Seoul, amid the coronavirus pandemic on Nov. 29, 2021, as health authorities have imposed an entry ban on foreign arrivals from eight African countries, including South Africa, to block the inflow of the new COVID-19 variant omicron. (Yonhap)

The KDCA announced it will expand at-home treatment for all infected patients, while critically ill patients are hospitalized, as the country struggles with bed shortages.

Son Young-rae, a senior health official, voiced concerns over the growing number of older patients, saying that more than 85 percent of critically ill patients are adults aged 60 or over.

As of Tuesday, about 3.03 million people had received a booster shot, according to KDCA data.

The KDCA earlier said those aged between 18 and 49 will get additional vaccine shots five months after they are fully vaccinated.

It will also set the expiration date of the “vaccine pass” at six months starting Dec. 20.

Currently, high-risk facilities, such as bars and nightclubs, have introduced a vaccine pass system that requires visitors to be fully vaccinated or have a negative test result.