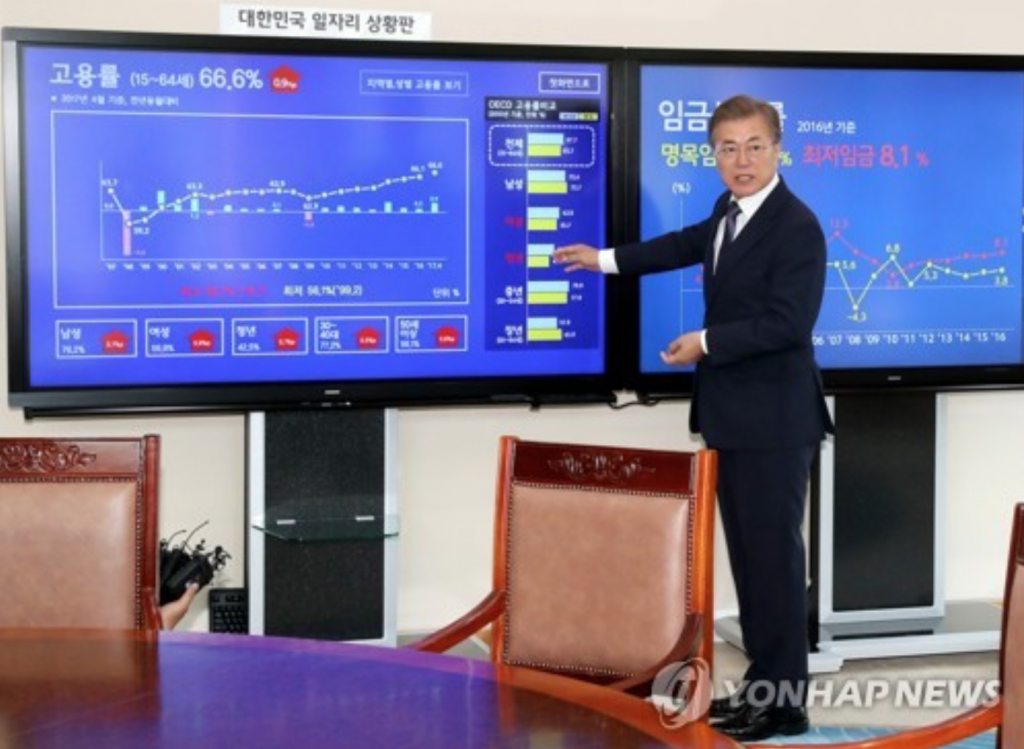 President Moon Jae-in demonstrates how to read key job-related indicators displayed on a new electronic bulletin board installed in one of his offices at the presidential office Cheong Wa Dae in Seoul on May 24, 2017. (image: Yonhap)

SEOUL, May 25 (Korea Bizwire) – The presidential office Cheong Wa Dae installed a new electric bulletin board Wednesday, offering a quick summary of current conditions in the country’s employment market, while also highlighting the emphasis the new president and his government place on creating jobs.

The new bulletin board was placed at one of President Moon Jae-in’s offices, and is largely designed to show a rise or drop in the number of jobs and workers here, Cheong Wa Dae officials said.

The board consists of two large panels, one of which displays 18 key indicators related to jobs and employment including the youth jobless rate and a rise or fall in the overall number of jobs, while the other will show changes in such indicators over the past two years.

The 18 key indicators also include the wage gap between regular and irregular workers, according to Cheong Wa Dae. Moon’s key election pledges included creating as many as 810,000 new jobs in the public sector alone.

He has also promised to create new “quality jobs,” which he later explained will include turning all irregular job openings in the public sector into regular, full-time employment.

Also Wednesday, the finance ministry said in a report to the State Affairs Planning Advisory Committee, a de facto transition team, that the government will announce a road map by the end of June on how to create jobs in the public sector.

Moon took office May 10 without a formal transition period as the election was brought forward by seven months following the impeachment and subsequent arrest of Moon’s immediate predecessor over a corruption scandal.

Moon’s first order since taking office was to create a new presidential committee on jobs.

Again highlighting his emphasis on job creation, the president has also created a new post for a senior Cheong Wa Dae official for jobs.

The country’s unemployment rate has remained rather high. Its jobless rate came to 4.2 percent in April, up 0.3 percentage point from a year earlier.

Job conditions for the youth, however, remain alarmingly worrisome.

The jobless rate of people aged between 15 and 29 years came to 11.2 percent last month, the second-highest level in the country’s history after 11.3 percent tallied in February, the government said earlier.

In his latest personnel reshuffle, the president named his new chief of staff for policy, a newly created post in charge of economic policies.