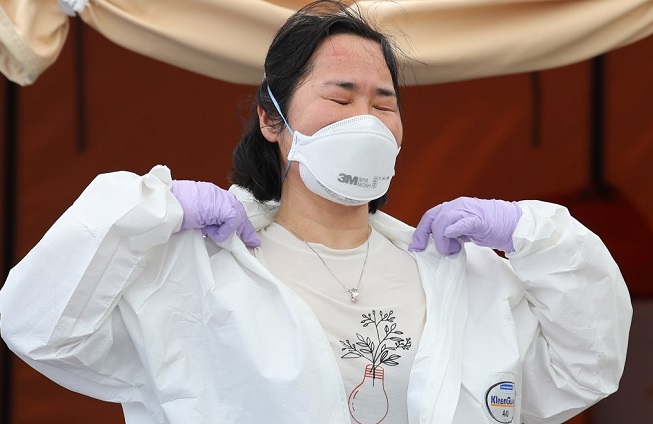 A medical professional takes off her protective suit after a morning shift at a coronavirus screening station in western Seoul on June 10, 2020. (Yonhap)

SEOUL, June 11 (Korea Bizwire) — The latest spike in new coronavirus cases is not the only cause for concern for medical workers fighting the pandemic at outdoor screening stations nationwide.

The recent spike in summer temperatures is more dreaded by front-line medical workers, who are obliged to put on heavy personal protective equipment (PPE), head to toe, against respiratory viruses.

With the mercury soaring above 30 C in the country lately, medical workers are drenched with sweat in less than five minutes after donning PPE and struggle to endure exhaustion and other unbearable physical ordeals.

“Sauna is an insufficient word to describe the suffocating heat inside the heavy protective suit,” said Lee Ji-eon, an official at a coronavirus screening station run by the Sangdang Community Health Center in Cheongju, central South Korea.

“We’re virtually taking a sweat shower wearing the protective clothing for up to four hours at one time. It’s like a mobile jjimjilbang,” Lee said, referring to Korean-style saunas, while adding that the temperature inside PPE already reached 40 C in March and is estimated to surge to unimaginable levels these days. 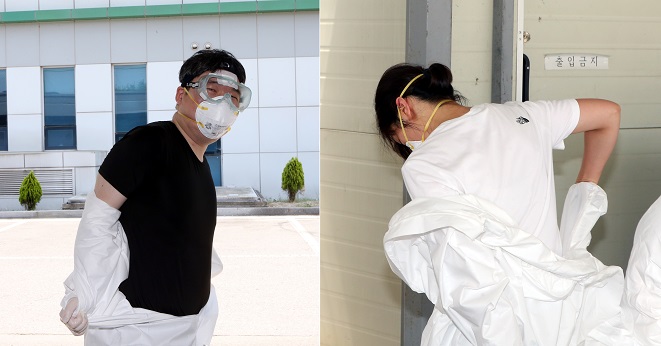 Using toilets is another challenge for the exhausted medical professionals, as PPE gear is one-time use and is hard to don and doff.

Most of them lament that they must refrain from drinking water before PPE shifts to avoid using the restroom.

If they go to the bathroom, they have to take off protective clothing and put on a new set, which usually takes at least 10 minutes each.

“Despite the stuffiness and sweltering heat during the four-hour shift inside PPE, it is difficult to drink water, let alone go to the bathroom,” Lee said.

Kim Ju-ho, a 42-year-old doctor who has worked at the Cheongju screening station since mid-February, said he is very concerned about the health of nurses and other medical professionals, citing PPE-related hardships.

Indeed, cases of PPE-clad medical workers fainting due to dehydration and heatstroke have been reported across the country since the recent onset of heat waves.

In Incheon, west of Seoul, three community health center employees collapsed at a walk-thru screening facility at a middle school on Tuesday while conducting COVID-19 tests for the school’s students amid sizzling temperatures above 30 C.

The employees, all clad in PPE gear, complained of dizziness, hyperventilation, hand tremors and general weakness before being rushed to a hospital. 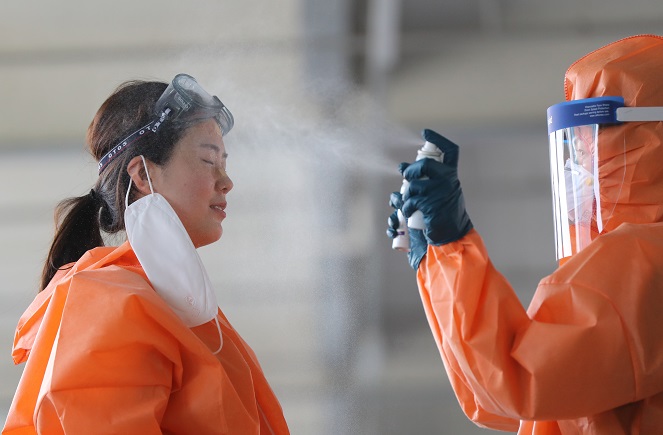 A medical worker in protective gear sprays face mist on her colleague at an outdoor clinic for coronavirus tests inside a public health facility in the southwestern city of Gwangju on June 5, 2020, to counter the scorching heat amid a heat wave hitting the region. (Yonhap)

A community health center in Goyang, just northwest of Seoul, reported that one of its female employees was sent to a hospital emergency room Wednesday due to severe bladder infection, which was apparently caused by her reluctance to go to the bathroom during duty at a coronavirus screening station.

As experts say cooling vests cannot be a solution for the moisture-sensitive PPE, the government announced Wednesday it will spend 3 billion won (US$2.51 million) to install air conditioners at all 614 coronavirus screening centers nationwide.

The government also recommended that thick protective clothing be replaced by full-length or surgical gowns, noting that surgical gowns, in particular, will help reduce tiredness in hot weather.

The Korea Meteorological Administration has forecast the number of heat wave days will double this summer from the 30-year average, making quarantine authorities and medical workers jittery.

Adding to the agonies of front-line medical workers, a recent spate of cluster infections and the subsequent surge in demand for coronavirus tests have significantly taken away their rest breaks.

“Health workers battling the coronavirus are now experiencing a critical situation, though they have so far endured hardship thanks to public support and a sense of duty as medical staff,” said Lim Seung-kwan, head of the Gyeonggi Provincial Medical Center in Anseong, 70 kilometers south of Seoul, where 25 doctors and 100 nurses are taking care of 54 COVID-19 patients in three daily shifts.

“A termination of the coronavirus crisis was anticipated until recently, but front-line medical workers now feel despondent as they have to start from the beginning again. They have already been weakened by their long-term intensive work, and the beginning of the heat waves makes them more troubled and discomforted,” Lim said.