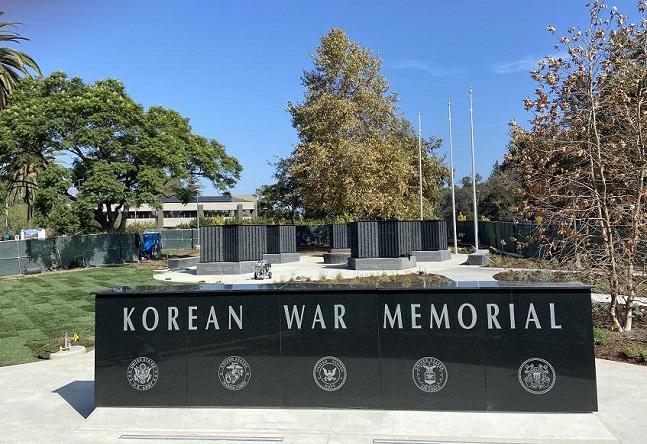 This photo, released by the Ministry of Patriots and Veterans Affairs on Nov. 11, 2021, shows the Korean War Memorial erected in Orange County, California, the United States.

SEOUL, Nov. 11 (Korea Bizwire) — A group of Korean Americans was set to unveil a new monument in the United States this week to commemorate the sacrifices of U.S. troops killed during the 1950-53 Korean War, the veterans affairs ministry said Thursday.

The dedication event was timed to coincide with South Korea’s memorial day honoring the foreign troops who fought alongside South Korean troops under the U.N. banner during the war, the first major armed conflict of the Cold War.

The memorial consists of five star-shaped pillars, each standing 1.5 meters high. On each pillar, the names of fallen troops are engraved.

The committee had carried out a fund-raising campaign for the establishment of the monument for 11 years.

The South Korean government donated 2.62 million won (US$2,211), 30 percent of the total cost for the memorial. More than 400 individuals and organizations participated in the project.

South Korean President Moon Jae-in and U.S. President Joe Biden also have sent congratulatory messages, which will be released during the ceremony, according to the ministry.

Around 1.7 million American troops fought in the war against the North Korean forces, backed by the then Soviet Union and China. Thousands of others remain missing

On Thursday, South Korea hosts the “Turn Toward Busan” ceremony at the U.N. Memorial Cemetery in the southeastern port city of Busan — an annual event that has been held since 2007, to commemorate the sacrifices of fallen U.N. troops.

The ministry said it will continue to roll out various global projects to express gratitude to the countries and troops that participated in the war in support of the South.