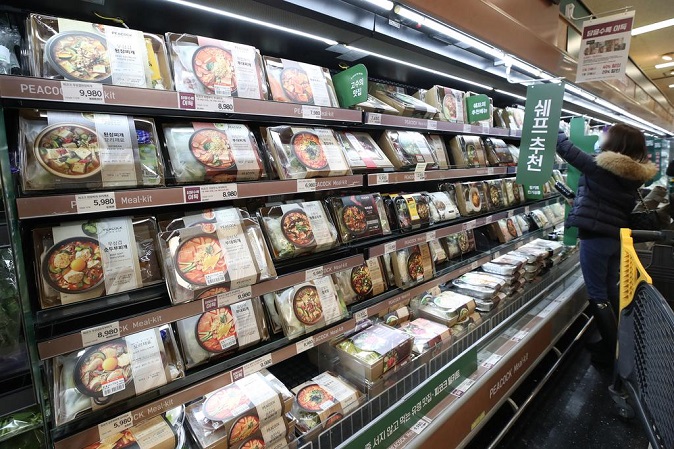 A woman selects home meal replacement products at a retail outlet in Seoul on Dec. 14, 2020. (Yonhap)

Lotte Members, the membership service for Lotte Group companies, analyzed data on HMR product transactions at offline stores and supermarkets for the period from 2019 to June this year in collaboration with Shinhan Card Co., a major South Korean credit card company.

The analysis showed that the share of women in the purchase of HMR products at offline marts and supermarkets stood at 70.4 percent, far higher than the 29.6 percent reported for men.

The share of those in their 20s or below remained low at 5.4 percent and 0.1 percent, respectively.

Shinhan Card analyzed data on HMR product transactions at unmanned stores for the period from 2021 to June 2022.

The analysis showed that the share of male customers stood at 50.1 percent, slightly higher than the 49.9 percent reported for women.

Men and women both saw their monthly spending on HMR products rise more than eightfold in June compared to the figures marked in January 2021. By age, those in their 30s marked the highest growth at 1,068 percent.