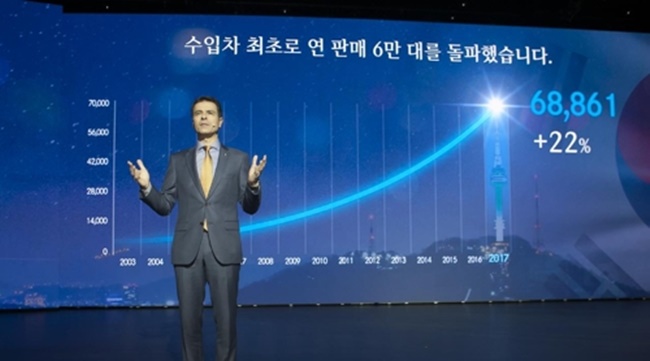 In this photo provided by Mercedes-Benz Korea, its President and CEO Dimitris Psillakis delivers a briefing on the company’s performance in South Korea last year during a press conference at Hotel Shilla in Seoul on Jan. 22, 2017. (Image: Mercedes-Benz Korea)

As South Korea’s economy is forecast to grow 3 percent this year and local demand for premium vehicles is on the rise, the German carmaker expects a similar level of growth this year compared with a year earlier, Mercedes-Benz Korea President & Chief Executive Dimitris Psillakis said in a press conference.

“We believe that the prospects of the Korean economy are very positive,” said Psillakis, adding that many new models from local brands, as well as import brands, will be launched here this year. He said Mercedes-Benz plans to invest more in its sales networks and services centers.

In this environment, this market has a potential to grow to at least the level of 2017 for the German automaker, he said citing the South Korean market.

For a bigger share in its sixth-largest market in the world, the German carmaker invested 210 billion won (US$196 million) in sales networks, showrooms and service centers, the company said in a statement.

This year, it plans to launch nine new models, including the fully revamped CLS 4-door coupe, the face-lifted C-Class sedan and the new E-Class Cabriolet in Korea, the statement said.