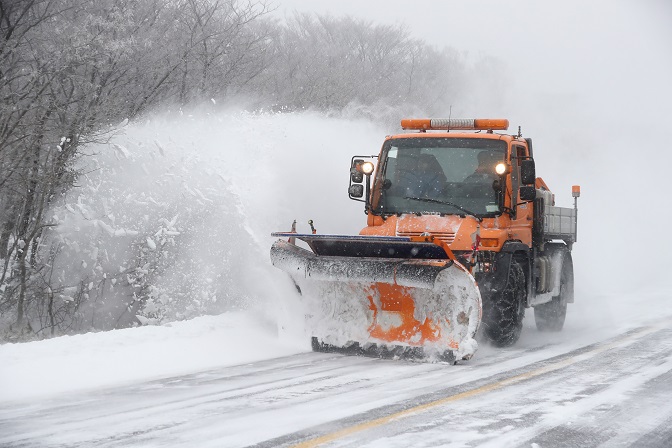 Unimogs are capable of clearing tons of snow in a matter of minutes, demonstrating extremely high efficiency. (Yonhap)

The all-terrain Unimog UGE, a special truck developed by Mercedes-Benz, has been employed to clear snow in the region.

Unimogs are custom-designed based on how they are going to be used, with prices ranging from 200-400 million won (US$179,000-$358,000). When removing snow, the vehicle uses one liter of diesel to cover one kilometer.

The vehicle, despite its exorbitant price and heavy use of fuel, is still preferred for its excellent performance.

Unimogs are capable of clearing tons of snow in a matter of minutes, demonstrating extremely high efficiency. Despite its sheer size, with a single tire sized at 1.3 meters, Unimogs can go as fast as 89 kilometers per hour.

While other snow-removal vehicles can’t withstand the salt and water caused during the snow removal process for more than seven or eight years, Unimogs have an average lifespan of 15 to 30 years.

They are used primarily for snow removal operations, but can also be used for weeding and cleaning roads and tunnels.