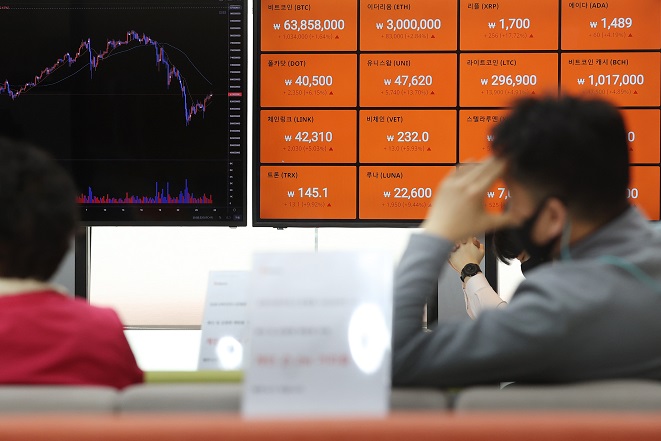 By next Friday, both foreign and local cryptocurrency exchanges targeting Korean investors must register with the nation’s anti-money laundering body and have real-name bank accounts.

Also, the tougher rules require cryptocurrency exchanges to get a security certificate from the nation’s internet security agency. Financial regulators said 28 out of 63 exchanges have obtained such a certificate.

Excluding the major four exchanges, 24 exchanges, which obtained the certificate, can continue their businesses after Sept. 25, but they will be unable to continue trading pairs using the Korean currency, because they have no real-name bank accounts.

Some medium-sized exchanges, including Flybit, Coredax and Foblgate, have suspended trading pairs using the Korean currency or announced the suspension of such trading. 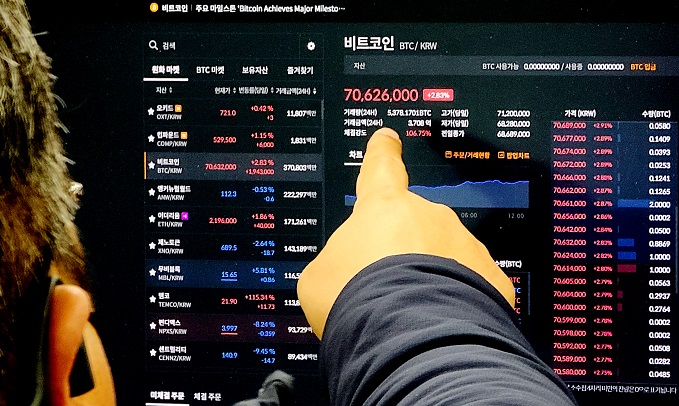 This photo, taken March 14, 2021, shows bitcoin topping 70 million won per unit as cryptocurrency transactions are on a bull run. (Yonhap)

The exact amount of cryptocurrencies traded on medium-sized or small exchanges is unknown, but market watchers said they account for about 5 to 7 percent of total cryptocurrency trading in South Korea.

According to a report released by the office of Rep. Kim Hee-gon of the People Power Party, the combined trading volume of the four major exchanges stood at 401 trillion won (US$340 billion) at the end of June, compared with 1,322 trillion won a month earlier.

Korean investors had been heavily buying virtual currency, considering it a lucrative asset amid the coronavirus pandemic.

Especially, young people had been investing in cryptocurrencies, anticipating higher returns, with some saying they cannot buy homes solely with their incomes amid skyrocketing home prices.