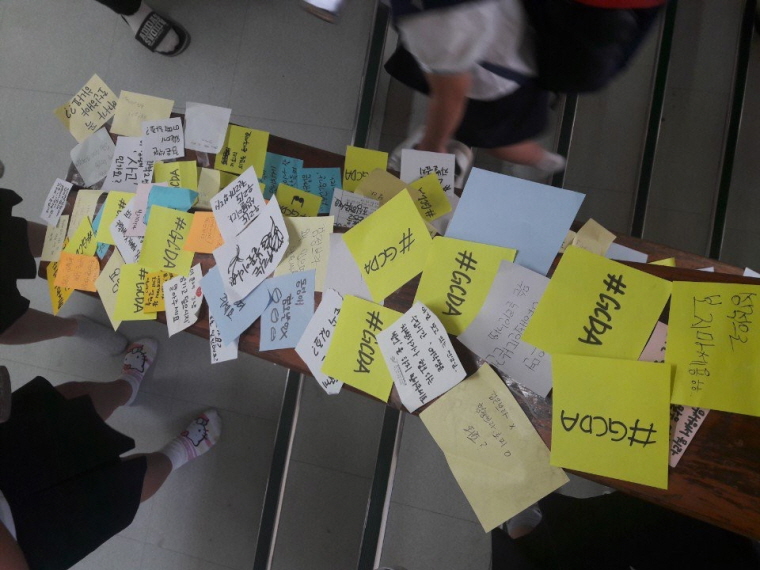 In protest of the current rule, students inscribed hundreds of hand-written messages on the school staircases and walls, reflecting their views. (image: Yonhap)

SEOUL, Jun. 18 (Korea Bizwire) — Students at a girls’ middle school in Busan have been holding protests against school regulations that require all students to wear white undergarments, asking that the school change its rules on the matter.

Two days earlier, the students held talks with the school principal, asking that the draconian regulations be amended.

The controversy was sparked earlier this month when students began to wear their summer uniforms.

When the school announced plans to check for proper attire, which included undergarments, students resisted, stating that it was an infringement on their human rights.

Current school regulations state that students can only wear white undergarments, which cannot be seen through the uniform.

In protest of the current rule, students inscribed hundreds of hand-written messages on the school staircases and walls, reflecting their views.

In response to the protests, school administrators have temporarily allowed students to wear undergarments of their choice, regardless of color.

One school official said that the school has already collected opinions from parents and teachers on the undergarments rule, most of whom were found to be in agreement with the students’ stance. A decision on the matter will be made imminently.

Meanwhile, the Busan Metropolitan Office of Education has asked the Human Right Commission of Korea’s Busan office to look into any school regulations that go against human rights practices since April of this year.