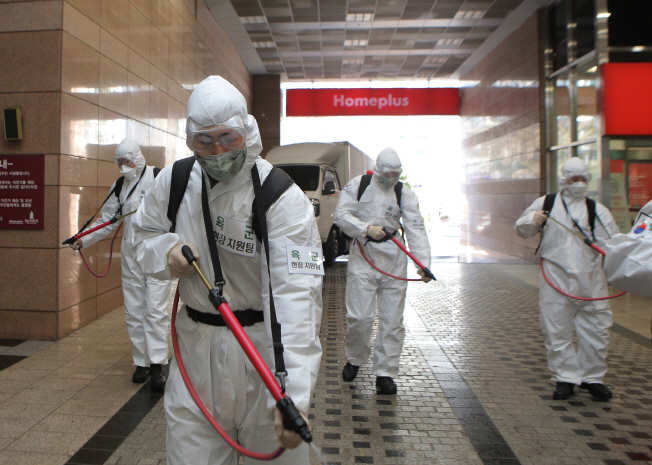 Members of the Army Second Operational Command sterilize a retail outlet in the southeastern city of Daegu on March 5, 2020, in this photo provided by the command.

SEOUL, May 27 (Korea Bizwire) — Over 200,000 man-days of military personnel have been mobilized to help cope with the coronavirus outbreak since the disease was first reported in the country in late January, the defense ministry said Wednesday.

The number includes some 29,000 man-days of medical workers, as well as 30,000 man-days for disinfection work and 125,000 for quarantine operations at ports and airports, according to the ministry.

The military has reported 52 of the coronavirus cases in barracks so far.

South Korea was on the verge of controlling the virus, with the daily increase falling to as low as just two cases three weeks ago.

But health authorities have been on alert again after a cluster infection reported in the popular nightlife district of Itaewon has led to other sporadic transmissions across the country.

In response, Park pledged to actively collaborate with the health ministry so that the military’s medical system can supplement and support the country’s quarantine system.