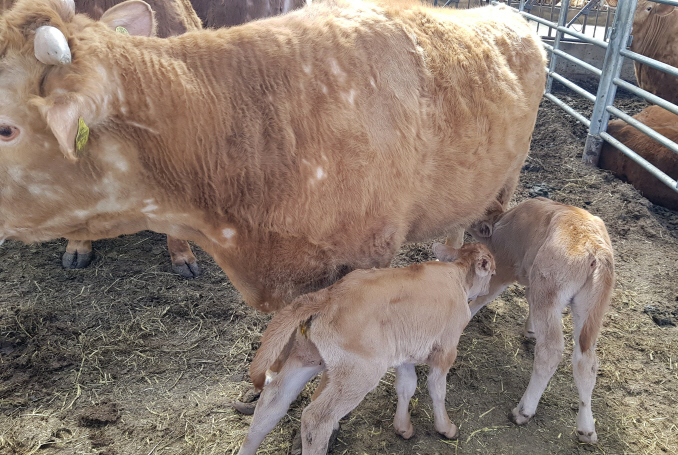 The mother cow gave birth 10 days prematurely, most likely due to anxiety triggered by the fire. (Yonhap)

GOSEONG, Apr. 9 (Korea Bizwire) — According to livestock industry sources in Gangwon Province on Monday, a cow gave birth to healthy twin calves as a wildfire raged in the early morning of April 5.

The cattle farmer and residents who heard of the birth welcomed the news with one heart, saying that it was a great comfort amidst the misfortune caused by the fire.

Tak Dong-kwon, a 60-year-old rancher whose farm is home to 120 Korean cows in Goseong, Gangwon Province, evacuated the area when he first heard the news of the fire.

When he came back to see his house, it was burnt to ash and the barn was burning. He and his son were able to protect the barn, which sheltered two newly born calves.

The mother cow gave birth 10 days prematurely, most likely due to anxiety triggered by the fire.

Preoccupied with dealing with the damage from the fire, the farmer hadn’t had a chance to declare the birth of the twins.

When asked the names of the calves, the farmer replied that he decided not to name either of them as he was worried that he would become attached to them.

The farmer bitterly reported that there was not much recourse in the aftermath of the disaster, but with government aid, he would find a way to rebuild and move on.