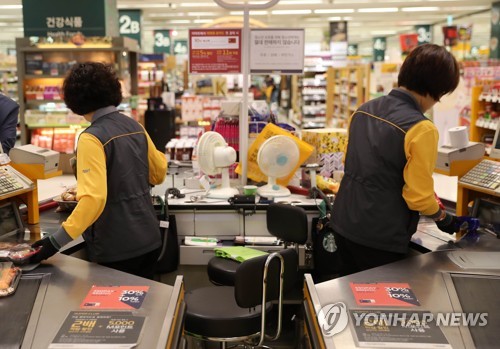 Cashiers at a supermarket chain in eastern Seoul. (image: Yonhap)

SEOUL, May 23 (Korea Bizwire) — A 44-year-old cashier at a major supermarket chain, who asked to be identified only by her surname, Yoon, is perplexed over the 35-hour work week her workplace introduced this year.

The full-time employee of E-Mart used to work 40 hours a week. If it were not for the reduction in her working hours, she would’ve been paid about 220,000 won (US$203) more every month because of a 16 percent raise in this year’s legal minimum wage.

“Minus five hours may sound like nothing, but it’s a big deal for me and my family,” she said.

E-Mart’s move comes ahead of the government’s planned cut in the maximum work hours, effective from July.

Under the revised law passed in February, companies with 300 employees or over must reduce the maximum work week to 52 hours from the current 68 hours from July 1. Industries exempted from compliance have been drastically cut from 26 to five — land, sea and air transportation, shipping and health. Smaller firms must gradually adopt the shorter work week system.

The work week cut has lowered Yoon’s pay raise from the minimum wage hike to about 11 percent.

“It’s awfully unfair when you work knowing that you’d be making less. Why is the government taking away my right to work as many hours as I want and get a fair pay?” she said.

The policy, one of President Moon Jae-in’s key election pledges, aims at reducing what are often called “inhumanely long” working hours in the country and improving work-life balance. South Koreans worked an average of 2,069 hours a year in 2016, the second-longest after Mexico among countries of the Organization for Economic Cooperation and Development (OECD).

The new rules have received mixed a reaction. Supporters hail it with a catch phrase, “We finally have a life with (free) evenings.” But critics counter, “We have evenings, but no money for a tasty dinner.” Evening and dinner are the same word in Korean.

Jun Hye-won, 35, is a designer at a mid-sized textile and apparel company in the middle of a work hours overhaul before the July 1 enforcement. Her company has been instructing employees to choose between an 8 a.m.-5 p.m. or a 9 a.m.-6 p.m. schedule and to make sure they swipe in and out with their electronic ID cards when they come to and leave the office.

“It’s absurd. What we do is just not doable under the 52-hour frame. We work overtime two or three days a week, it takes a lot of discussion, revision and communication with partners,” Jun said. “We sign out at 5 p.m., and we have no choice but take everything home with us to get it done. So much for wor-la-bal.” “Wor-la-bal” is a shortened form of “work-life balance.”

Yoon is not so different. She used to have 30 minutes to prepare before her shift started. Under the new work week system, she has 20 minutes to get ready. Her one-hour break time has been cut down to 40 minutes.

“It’s not only money I’m getting less of. I feel my right to take a decent moment away from work, to welfare, has been infringed upon,” Yoon said. 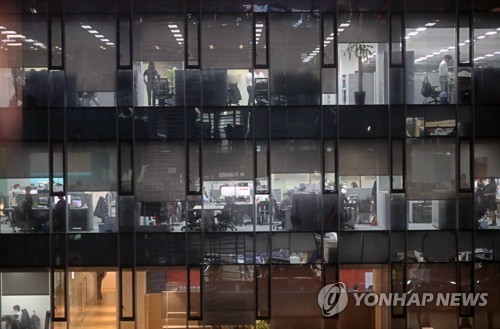 A view of office workers inside a building. (image: Yonhap)

Experts say the 52-hour mandate overlooks the situation of low-income workers like Yoon who get paid by the hour, as well as employers that run small and medium-sized firms.

“The government crammed for it when smaller companies weren’t ready,” said Cho Joon-mo, an economics professor at Sungkyunkwan University. “They cannot guarantee their workers any benefit in return for sacrificing their income and yet want to keep productivity intact. Who would want to work under such conditions?”

A report by the Korea Economic Research Institute estimated that firms will need to hire an additional 266,600 staff in the face of the reduced work week. That will cost them about 12 trillion won, most of which will be shouldered by mid-sized companies. The Korea Labor Institute forecast that workers in the manufacturing sector will see an approximate 13 percent cut in salaries.

“Policymakers have almost romanticized the idea of it. Instead of carefully considering all possible repercussions and ways to minimize the negative impact, they disregarded the details,” he said.

Fine-tuning through legislative procedure will be inevitable, both Cho and Park pointed out.

“We need to build a model for the work week pattern that fits each type of business and industry, not driving everyone into one single rule,” Cho said.

Park stressed the need to allow more flexibility for companies.

“It’s time to work on details in a way that employers and staff will have more leeway in deciding what’s best for their workplace. They know better than anyone else.”