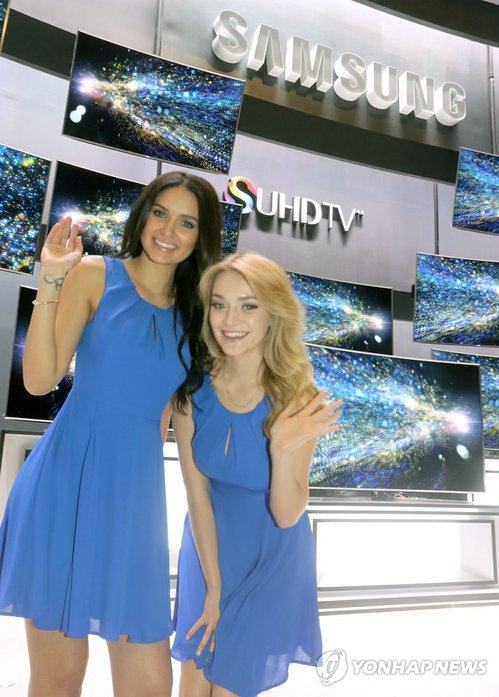 SEOUL, Jan. 5 (Korea Bizwire) – Samsung Electronics Co. is set to release its first quantum dot TV at the Consumer Electronics Show (CES) taking place in Las Vegas starting on Tuesday (U.S. time), as the world’s top tech firm steps up to find its next-generation growth driver.Dubbed the “SUHD TV,” with the S representing spectacular, smart, stylish and superb, Samsung’s quantum dot TV will be showcased in 65, 78 and 88 inches for the four-day session, the company said.

Quantum dot refers to semiconductor nanocrystals whose dimensions are smaller than 10 nanometers. (A nanometer is equal to one billionth of a meter.) Using this display material, a TV can reproduce more accurate colors and, unlike light-emitting diodes (LED), lasts longer as it doesn’t degrade from humidity and oxidation.

According to Samsung, SUHD TV can display over 1 billion colors, 64 times more than existing models.

The release has been widely expected in the industry, as the company applied for copyrights last year for its quantum dot TV as a brand in countries that included South Korea, Australia and the United States.

The world’s No. 1 maker of smartphones and memory chips has been striving to keep itself ahead of Chinese upstarts like Xiaomi Inc. while also having to compete with Apple Inc. in high-end lineups amid a profit decline from its smartphone business.All of Samsung TVs to be displayed at the 2015 CES will be installed with its own operating system Tizen, Samsung said.

Samsung had wanted to expand its software sector, a weakness for the tech firm, but its previous run of Bada ended in failure.

The display of Tizen-powered TVs at the CES demonstrates Samsung’s desire for as good a run in software as in hardware, since the company knows establishing competitiveness in both has become essential to taking the lead in future technologies, such as the Internet of Things (IoT), a concept in which everything is connected and controlled through smart devices.

Visitors at Samsung’s CES booth will get a chance to remotely control a BMW via a voice command on Samsung’s wearable “Gear S” device and listen to music with the virtual reality “Gear VR” headset, a part of the IoT exhibition.Samsung is also due to unveil the world’s largest 105-inch, bendable quantum dot TV and the 8K TV that shows viewers 3-D images without having to wear glasses.
(Yonhap)
Tweet