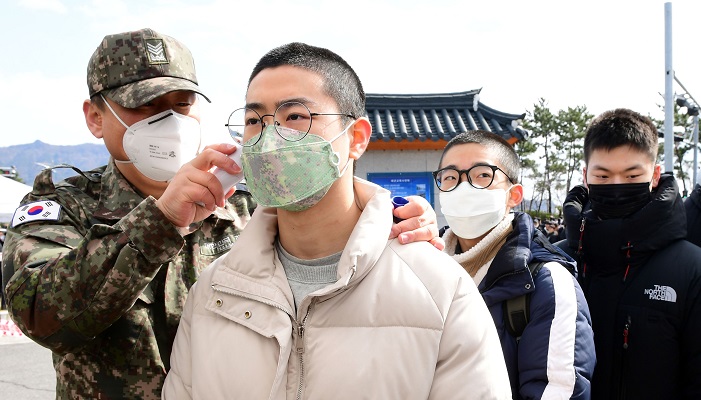 Draftees get their body temperatures checked before entering boot camp in Changwon, 398 kilometers south of Seoul, on Feb. 17, 2020, in this file photo provided by the Navy.

SEOUL, Oct. 25 (Korea Bizwire) — The military is putting the finishing touches on a relaxed hair guideline for draftees, officials said Monday, amid its stepped-up efforts to improve human rights at barracks.

Under the envisioned guideline, the military will unify separate grooming standards for draftees and senior officers — a change that civic activists have advocated to remove “discrimination” between the two groups.

The current guideline allows senior officers to choose either a longer standard hairstyle or a short one, while draftees must keep their hair short. Details vary among the Army, Navy, Air Force and Marine Corps.

After unifying the standards, enlisted troops will also be able to keep their hair longer, the officials said, noting the military has yet to finalize the guideline.