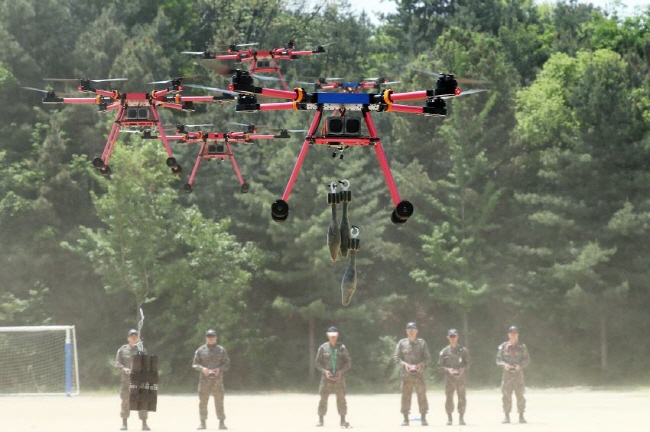 South Korean troops use reconnaissance drones during training in this file photo provided by the Korea Army Academy at Yeong-Cheon.

The Defense Acquisition Program Administration (DAPA) said that it inked a 4.6 billion-won (US$3.5 million) deal with Hyundai Rotem Co. for the multi-legged robot, and a 4.3 billion won deal with Preneu Co. for the drone.

The arrangements marked the first case of deals struck under a “fast-track” research and development project aimed at developing high-tech weapons within two years to meet military needs, according to DAPA.

DAPA plans to start test-running both weapons systems at military units in the latter half of 2024 following a two-year development process, officials said.

The envisioned robot is designed for an early identification of enemy threats, due responses to them and the minimization of human casualties during counterterrorism operations.

The drone project is designed to support tactical units’ multidimensional operations on various security missions, according to DAPA.

The two projects fall in line with Seoul’s Defense Reform 4.0 initiative aimed at nurturing a sturdier military based on cutting-edge technologies, officials said.