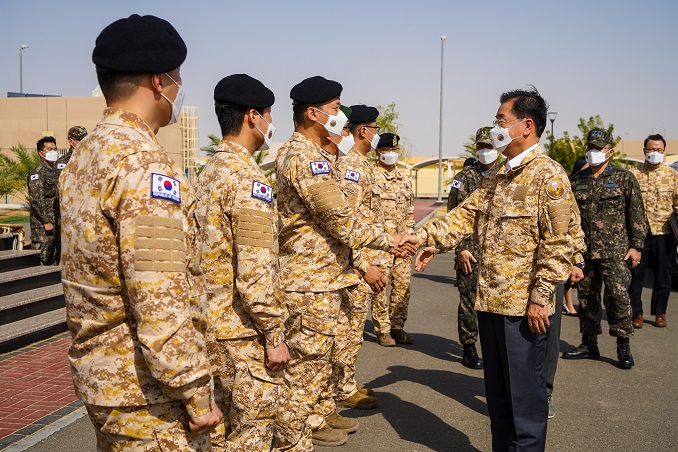 Foreign Minister Chung Eui-yong (R) shakes hands with a member of South Korea’s Akh unit in the United Arab Emirates (UAE) on Jan. 17, 2022, in this photo provided by the unit.

Pfizer’s Paxlovid antiviral pills will be sent by air to the contingents in the United Arab Emirates (UAE), South Sudan and Lebanon under Thursday’s distribution approval by the Korea Disease Control and Prevention Agency (KDCA), the officials said.

The military also plans to send the pills to the Navy’s anti-piracy Cheonghae unit operating in waters off Africa next month.

Recently, the Dongmyeong unit in Lebanon and the Hanbit unit in South Sudan also reported virus cases, raising the need for such treatment pills.

The country, meanwhile, plans to send booster shots for troops in Lebanon and South Sudan later this month. The military will inoculate the Akh and Cheonghae members under cooperation with the UAE and Omani governments.

South Korea has a total of around 1,000 troops operating in the four overseas units.