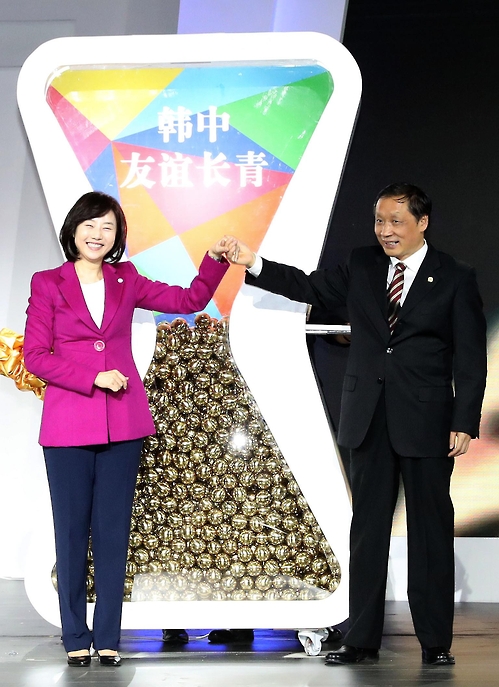 Cho Yoon-sun (L), the South Korean minister of culture, sports and tourism, and her counterpart Li Jinzao (R), chairman of the China National Tourism Administration, pose for a photo at the closing event for “Visit Korea Year” at the Kerry Hotel Beijing on Dec. 15, 2016. (image: Yonhap)

BEIJING, Dec. 16 (Korea Bizwire) – South Korea and China have wrapped up their “Visit Korea Year 2016″ campaign in Beijing in a ceremony overshadowed by a diplomatic feud over Seoul’s missile shield plan.

South Korean Minister of the Culture, Sports and Tourism Cho Yoon-sun and China National Tourism Administration Chairman Li Jinzao presided over the celebration of the yearlong national drive to promote Korean tourism among the Chinese on Thursday.

Beijing fiercely opposes the plan, which it said would harm its strategic interests in the region. In an apparent retaliation, China has restricted cultural exchanges in the tourism and entertainment sectors.

In his opening remark, Li said the two countries, with geographical proximity and cultural similarity, should cooperate in the tourism sector for mutual benefits.

Li also openly expressed his concern that the on-going feud over THAAD could have negative impacts on bilateral relations down the road.

Saying that the bilateral relations have recently faced new challenges and are heading toward an uncertain era, he stressed that the two governments should seek solutions together to secure conditions for solid cooperation in tourism.

His remarks apparently suggested that unless disagreements between Seoul and Beijing are resolved, cooperation in the tourism sector won’t get any easier next year.

In her celebratory address, Cho emphasized the importance of keeping private exchanges flourishing regardless of political situations.

“In 1992, when the two countries established diplomatic ties, there were only 100,000 mutual visits. After 20 years, the number has passed 10 million,” she said. “The ‘Visit Year’ events this year and last year helped bring about the era of 20 million visits.

“We will continue inviting (the Chinese) to Korea, and (when they come), we will try to show a new side of Korea,” she said.

Participants said the overall atmosphere appeared to be better than previously expected. During his speech, Li lightened the mood by speaking simple Korean several times. They later shared their thoughts on the results of the tourism campaign over dinner.