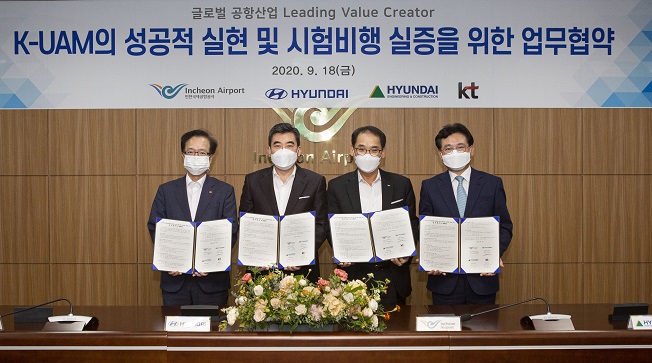 Officials from KT Corp., Hyundai Motor Co., Incheon International Airport Corp. and Hyundai Engineering & Construction Co. pose for a picture after signing an agreement to develop an urban air mobility service on Sept. 9, 2020, in this photo provided by the automaker.

Major local carriers have emerged as key players in the transport shake-up as network infrastructure and technology are crucial in developing future vehicles.

Under the agreement, KT will develop and test a communications platform that connects and manages the flying vehicles, while Hyundai Motor will be responsible for their production.

The partnership comes after South Korea announced in June plans to commercialize UAM by 2025, which promises to slash city dwellers’ time stuck in traffic.

The transport ministry estimates the value of the local UAM market to reach 13 trillion won (US$11.2 billion) by 2040, with the global market size estimated at 730 trillion won.

KT said it is considering plans to further develop UAM as a last-mile delivery service by utilizing its nationwide infrastructure of communication facilities as delivery stations for the vehicles. 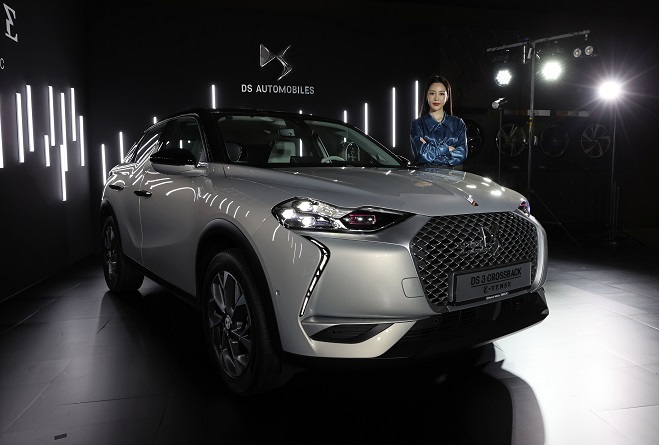 A model poses with the DS 3 Crossback E-Tense at a showroom in southern Seoul on Sept. 21, 2020. LG Uplus Corp. partnered with local auto importer Hanbul Motors to introduce connected car technology to the brand. (Yonhap)

Its local rival LG Uplus Corp. is also setting its sights on future mobility via a partnership with Hanbul Motors, a local importer of auto brands under France’s PSA Group, such as Peugeot and DS Automobiles, a premium spin-off of Citroen.

Under the partnership, the telecom operator will introduce connected car technology to the two brands in South Korea.

LG Uplus said it will first apply its navigation platform to DS’ new electric vehicle (EV), the DS 3 Crossback E-Tense, and expand features, such as a voice-recognition system that can control smart devices at home.

The telecom operator also partnered with local social venture Coactus Ltd. in 2018 to launch another taxi-hailing app for hearing-impaired drivers.