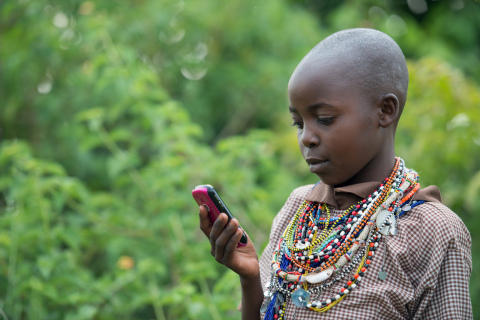 UNESCO partners with Worldreader to release study results on the impact of e-reading in developing countries. (Photo credit: Jon McCormack for Worldreader)

SAN FRANCISCO, April 23, 2014 (Korea Bizwire) – In celebration of World Book Day, UNESCO,  in coalition with Worldreader  and Nokia,  today released the results of the largest survey on mobile reading in  the developing world, which revealed that mobile devices can help  significantly enhance people’s literacy skills.

According to the responses of nearly 5,000 people across seven  developing countries – Ethiopia, Ghana, India, Kenya, Nigeria, Pakistan  and Zimbabwe – mobile reading can open educational opportunities to  nearly seven billion people, ultimately reducing illiteracy rates  forever. In places where physical books are scarce, mobile phones are  plentiful. And while mobile phones are still used primarily for basic  communication, even the simplest of phones are a gateway to long-form  text.

According to the report, “Mobile reading is not a future phenomenon but  a right-here, right-now reality.” Indeed, Worldreader’s free mobile  reading app – which averages nearly 200,000 users per month – is  evidence that there is high demand for mobile reading in areas that lack  access to paper books. “We now have two years of data proving that  people are spending hundreds of hours a month reading short and long  form text, using basic feature and Android phones,” said Elizabeth  Hensick Wood, director of digital publishing and mobile platforms at  Worldreader. “As part of this research, we interviewed dozens of  individuals, ranging from students to teachers to parents, and all told  a similar story: they do not have access to paper books, they are  thrilled to now have thousands of free books on their mobile phones and  they are now reading more than ever.”

The study discovered that women and girls in particular are benefitting  from having a new way to access books, reading up to six times more than  men and boys, and that parents regularly read to children using mobile  phones. The study also shows that a vast majority of people enjoy  reading more on their mobile phones, and that mobile reading often  reverses people’s negative attitudes towards reading.

Contrary to what many may think, only 18 percent of the respondents  cited cost, or “use of airtime,” as a potential barrier to reading more  on mobiles. This is likely due to platforms such as the Worldreader  Mobile platform on biNu, which compresses data and brings the cost of  reading to roughly 2-3 cents per every 1,000 pages read. Instead, lack  of relevant content was cited as the number one barrier to mobile reader  adoption by 60 percent of the respondents.

Recent data from the United Nations shows that of the estimated seven  billion people on Earth, more than six billion now have access to a  working mobile phone. If every person on the planet understood they can  turn their mobile phone into a library, an estimated six billion people  would have access to books. “A key conclusion from this study is that  mobile devices can help people develop, sustain and enhance their  literacy skills. This is important because literacy opens the door to  life-changing opportunities and benefits,” said Mark West from UNESCO,  author of the report.

Since 2012, Worldreader has helped pioneer new opportunities for mobile  reading in developing countries by promoting a mobile app to distribute  relevant content to users in parts of Africa and Asia. The organization  has plans to broaden its efforts and provide more than one million  people with access to free e-books on mobile phones by the end of 2014.

“World illiteracy can be attributed in part to the fact that people have  access to a very small number of books, or none at all in some areas of  the world,” said David Risher, CEO and co-founder of Worldreader. “Yet  there are more cell phones on the planet than there are toilets or  toothbrushes. Already kids and families have read more than 1.7 million  Worldreader books – helping them attain a more prosperous, more  self-reliant future.”

UNESCO’s study highlight readers’ demographics in developing countries,  and the impact this has on the population. Key findings include:

Worldreader is a global not-for-profit organization that aims to put a  library of digital books in the hands children and families across the  world. Founded in 2010 by former Microsoft and Amazon executive David  Risher, and former Marketing Director at Barcelona’s ESADE Business  School Colin McElwee, Worldreader works with device manufacturers, local  and international publishers, governments, education officials and local  communities to deliver its programs. Using culturally relevant digital  books distributed across mobile phones and e-readers, Worldreader has  demonstrated that its rapid scaling capacity is the most effective way  to eradicate illiteracy across the globe. Worldreader is piloting  e-readers in schools and libraries in nine Sub-Saharan countries and on  Worldreader Mobile has more than 150,000 regular monthly readers across  the world.