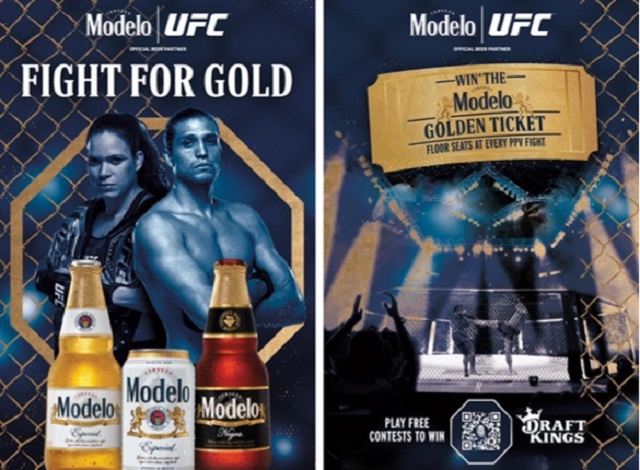 CHICAGO, Feb. 3 (Korea Bizwire) — Modelo, the Official Beer of UFC, knows that UFC fans are as passionate as they come. To reward their Fighting Spirit, Modelo is providing unprecedented access and experiences to the sport they love. With the help of DraftKings Inc. (Nasdaq: DKNG), UFC enthusiasts will have a shot to compete and win cash prizes and the “golden ticket” grand prize: floor seats, travel and accommodations, to the year’s biggest UFC Pay-Per-View events in Las Vegas and other cities across the United States for a full year*.

The unique prizes don’t end there. In addition to a pair of gold tickets to sit in floor seats for the biggest fights of the year, the grand prize winner will get to be a guest of UFC broadcaster, Jon Anik during fight week, where they can take part in Jon’s pre-fight announcer rituals, receive exclusive behind-the-scenes access to pre-fight weigh-ins, and participate in meet-and-greets with iconic UFC personalities. Anik will also lend his trademark high-energy voice to reward the grand prize winners with special walkout announcement videos, which are normally reserved for UFC fighters as they enter the Octagon on fight night, while the winner and their guest walk to their seats, along with much more!

“Modelo and UFC are offering the ultimate fighting experience for our passionate fans – giving an opportunity to win unparalleled and close-up access to all of the best action,” Anik said. “I just knew I wanted to be part of that fan experience, especially because of the sheer number of times I have delivered Modelo’s ‘Brewed for those with the Fighting Spirit,’ tagline over the years.”

The contest will run through DraftKings, and fans 21+ can enter for their shot to win by visiting draftkings.com/modelo. Fans will have the opportunity to compete for prizes for each PPV event- February 12, March 5 and April 9. The best lineups from the first two contests will win cash prizes and the top score from the final week will win the Modelo “golden ticket” grand prize. The contest opens February 1, 2022 and runs until April 9, 2022.

“As we continue our ongoing partnership with the UFC, Modelo is always thinking about how to bring one-of-a-kind experiences to our passionate, shared fanbase,” said Greg Gallagher, Vice President of Brand Marketing, Modelo. “We can’t wait to reward the Fighting Spirit of fans with what we’re calling the ‘gold standard’ of experiences and our biggest UFC prizing yet – an opportunity to immerse themselves into UFC in a big way that hasn’t been done before.”

*Pick winning fighters and you could win Grand Prize tickets to 10 UFC PPV fights in the U.S., June 2022 – May 2023. No purchase or payment necessary to enter. Must be 21 years or older to enter with verified age. 50 U.S./DC only. Void where prohibited. Contest series to begin 2/1/22 and end 4/15/22. Exact Contest dates are subject to change, pending UFC fight schedules. Eligibility restrictions apply. See draftkings.com for details and Official Rules. No alcohol is awarded with any prize.

ABOUT MODELO®
Born in 1925 in the small town of Tacuba, Mexico, Modelo has been bringing distinctive high-quality beer to people ever since, including Modelo Especial®, Modelo Negra®, and a flavorful lineup of Modelo Cheladas. Modelo Especial is a golden, full-flavored Pilsner-style Lager with a clean, crisp finish. As the #1 imported beer in the U.S., Modelo Especial recently surpassed 150MM cases sold in 2021. The Modelo family of beers are exclusively brewed, imported and marketed for the U.S. by Constellation Brands.

About UFC®
UFC® is the world’s premier mixed martial arts organization (MMA), with more than 625 million fans and 187 million social media followers. The organization produces more than 40 live events annually in some of the most prestigious arenas around the world, while broadcasting to approximately 900M TV households across more than 175 countries. UFC’s athlete roster features the world’s best MMA athletes representing more than 75 countries. The organization’s digital offerings include UFC FIGHT PASS®, one of the world’s leading streaming services for combat sports. UFC is owned by global entertainment, sports and content company Endeavor, and is headquartered in Las Vegas, Nevada. For more information, visit UFC.com and follow UFC at Facebook.com/UFC, Twitter, Snapchat, Instagram and TikTok: @UFC.

A photo accompanying this announcement is available at https://www.globenewswire.com/NewsRoom/AttachmentNg/dc7f867a-8667-4158-b6fe-11f78f2df421