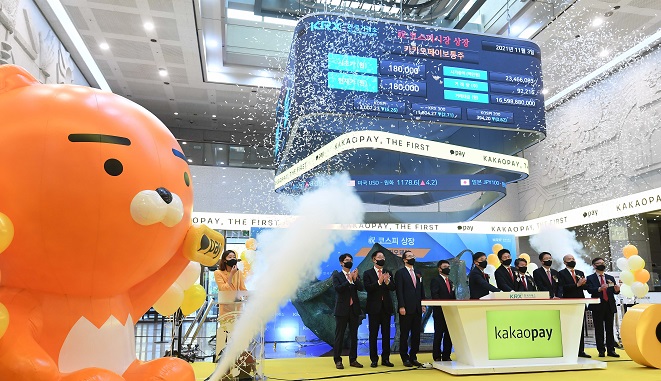 Sohn Byung-doo, chief of the Korea Exchange, and other participants attend a ceremony at the bourse in Seoul on Nov. 3, 2021, to mark the stock market debut of Kakao Pay, the payment arm of Kakao Corp., South Korea’s top messenger app. (Yonhap)

A total of 89 companies went public in 2021 by listing stocks on the benchmark KOSPI and secondary tech-heavy KOSDAQ markets and raised a combined 19.7 trillion won (US$16.4 billion), according to the data from the Financial Supervisory Service.

The money raised from IPOs represented a 333.9 percent surge from 4.5 trillion won a year earlier, the data showed. The number of companies whose shares listed on the stock markets for the first time also jumped from the previous year’s 70.

The IPO market was driven by the overall rise in local stock markets and ample liquidity injected into the economy bolstered by low borrowing costs in line with record low policy rates intended to boost the pandemic-hit economy.

Investors got more interested in new stock listings, with the competition ratio for IPO stocks jumping to an average of 1,136 to 1 last year, up from the 956-to-1 ratio a year earlier.

The prices of newly listed stocks closed 57.4 percent higher on average on their first trading day, compared with their IPO prices. The return marked the highest in five years, the data showed.