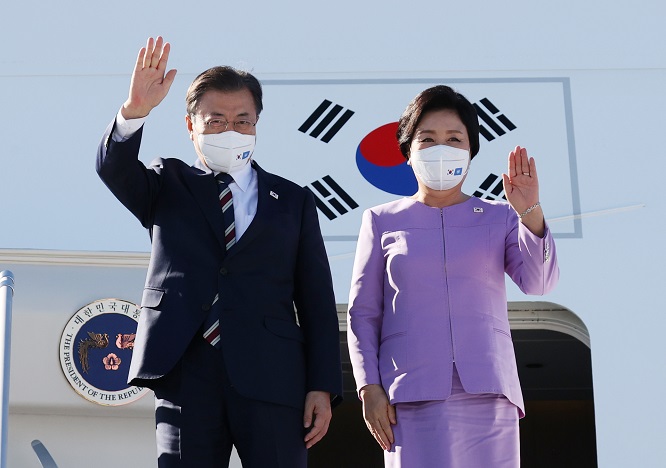 He plans to deliver a keynote speech on Korean peace and Seoul’s role in resolving global challenges, including the COVID-19 pandemic and climate crisis, according to his office.

His five-day visit to the U.S., which will also take him to Hawaii for an alliance event, comes as Korean people celebrate Chuseok, one of their biggest and most important traditional holidays.

It is the Korean equivalent of Thanksgiving Day.

Moon is scheduled to address the 76th session of the U.N. General Assembly at the headquarters of the international organization Tuesday (local time).

He is expected to request support for Seoul’s peace drive and reaffirm its commitment to make more contributions to the international community.

This year, in particular, the two Koreas mark the 30th anniversary of their simultaneous accession to the U.N.

On Monday, Moon will be present at the Sustainable Development Goals Moment (SDG Moment) event, along with the members of BTS, a globally renowned South Korean boy band and Moon’s special envoy for “future generations and culture.”

The SDG Moment is designed to put a fresh vigor into the campaign to achieve the U.N.-led goals adopted in 2015.

Moon will then hold bilateral summit talks with Slovenian President Borut Pahor and Vietnamese President Nguyen Xuan Phuc on the sidelines of the U.N. session.

His aides said there is no plan for a separate meeting with U.S. President Joe Biden.

Moon plans to meet with Albert Bourla, chairman and CEO of Pfizer, and join a roundtable meeting on South Korea’s bid to become a global vaccine hub.

Following a two-night stay in New York, Moon will fly to Honolulu for the transfer of the remains of South Korean and American troops killed during the 1950-53 Korean War.

He will also award medals to independence activists under Japan’s colonial rule of Korea from 1910-45, who reside currently in Hawaii.

Moon is to return to Seoul on Thursday, a day after the Chuseok holiday season.