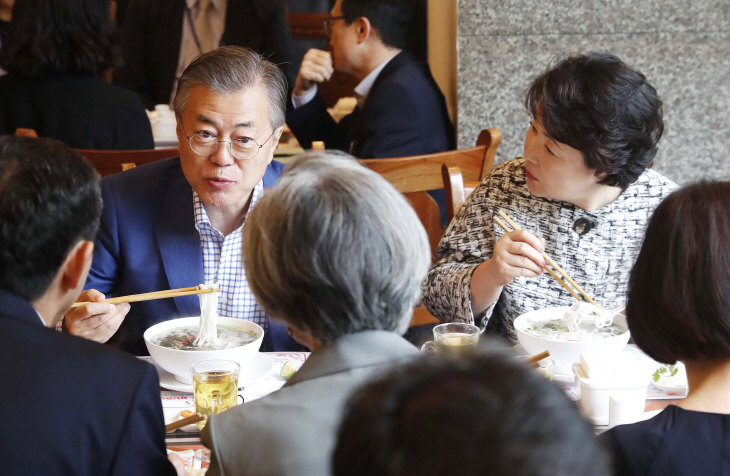 HANOI, Mar. 26 (Korea Bizwire) — South Korean President Moon Jae-in dropped by a no-frills rice noodle restaurant in Hanoi for breakfast on Saturday to mingle with ordinary Vietnamese citizens on the last leg of his three-day state visit there.

The diner, which is also well known among South Korean travelers as one of Hanoi’s three-best rice restaurants, serves beef rice noodles, tea, coffee and other beverages.

Moon and the first lady exchanged greetings with local people dining at the restaurant and enjoyed breakfast. South Korean Foreign Minister Kang Kyung-wha and South Korean Ambassador to Vietnam Lee Hyuk and his wife were also on hand.

After the ambassador explained that the restaurant has no seafood noodle menu, Moon ordered a bowl of beef rice noodle soup that sells for about 3,800 won (US$3.50), according to presidential spokesman Kim Eui-kyeom. Moon is known as an aficionado of seafood.

During the meal, Moon took photos with Vietnamese and South Korean nationals who recognized him from outside and gathered around the place.

The owner of the restaurant later gifted Moon with a wooden case containing wooden chopsticks.

Moon arrived in Hanoi on Thursday and held a summit with Vietnamese President Tran Dai Quang the following day. He also met with other top Vietnamese leaders to discuss deepening diplomatic ties and enhancing economic cooperation. He departed for the United Arab Emirates after the visit to the Hanoi restaurant.

Moon and his wife also made headlines by enjoying breakfast at a casual Beijing restaurant frequented by ordinary Chinese during an official visit to China in December last year. 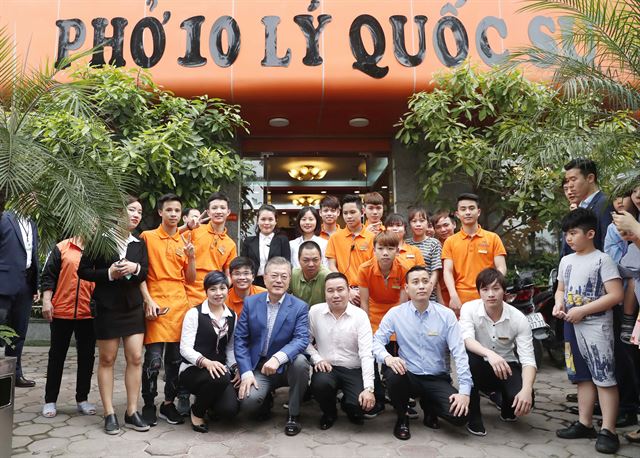