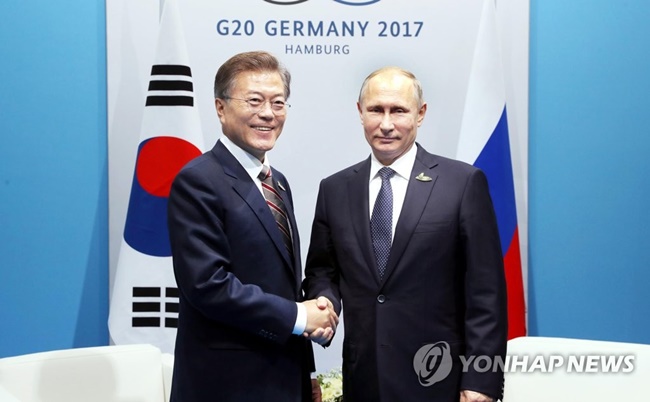 President Moon Jae-in and his Russian counterpart Vladimir Putin are set to hold talks Wednesday, shortly after Moon’s arrival in Vladivostok to attend the Eastern Economic Forum (EEF) to be held the following day. (Image: Yonhap)

President Moon Jae-in and his Russian counterpart Vladimir Putin are set to hold talks Wednesday, shortly after Moon’s arrival in Vladivostok to attend the Eastern Economic Forum (EEF) to be held the following day.

“Because of North Korea’s nuclear test, we expect a large part of the Korea-Russia summit to focus on the conditions created by the North’s nuclear test, the exchange of the countries’ related information and discussions on their countermeasures in the future,” Nam Gwan-pyo, a vice chief of the presidential National Security Office, told a press briefing.North Korea conducted its sixth and most powerful nuclear test so far on Sunday.

The EEF is originally aimed at discussing the economic cooperation of countries, which in turn is designed to help develop Russia’s Far East connections.

Nam, also a standing member of the National Security Council, said the upcoming talks between Moon and the Russian leader will have an equal, if not greater, political meaning.

“The most important issue for the Korea-Russia summit has become forming a personal relationship and mutual trust between the leaders of the two countries,” Nam said, noting that such a relationship may be crucial to the countries’ joint efforts to denuclearize North Korea.

Highlighting the urgency of the North Korean nuclear issue, the South Korean president discussed ways to enhance his country’s security cooperation with Russia while meeting with Nikolai Patrushev, the secretary of the Security Council of Russia, at his office in Seoul.

“On the occasion of Secretary Patrushev’s South Korea visit, South Korea and Russia discussed ways to enhance their security cooperation, such as measures against North Korea’s nuclear provocation, as well as ways to promote their bilateral relationship that included preparations for the Korea-Russia summit to be held in Vladivostok on Sept. 6,” Cheong Wa Dae said in a press release.

Moon’s upcoming meeting with Putin will mark the second of its kind since Moon took office in May. The two met on the sidelines of the Group of 20 summit in Hamburg, Germany in early July.

Nam said the efforts to build and improve a personal relationship between the two heads of state may include the resumption of so-called summit diplomacy, under which they will regularly exchange visits for summit talks.

Putin’s trip to Seoul in November 2013 marked the last of those kind of visits, suspended since Russia’s military intervention in Ukraine in 2014.

Those meetings too are widely expected to focus on joint efforts to denuclearize North Korea, Nam said.