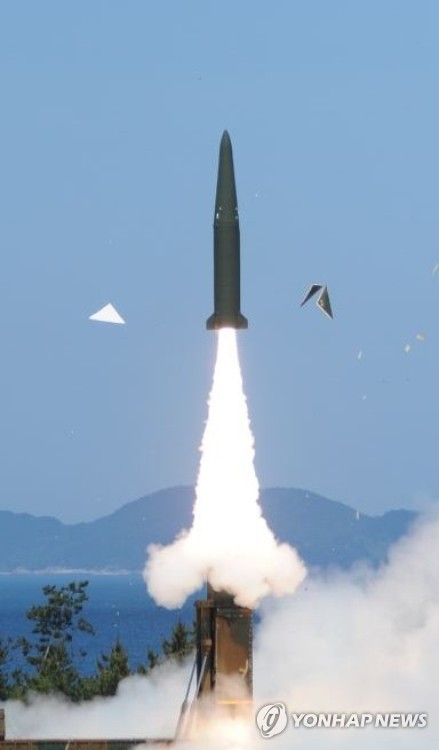 It could send another strong warning message to North Korea, which is continuing its nuclear and missile development in violation of U.N. Security Council resolutions, they said.

“There was a test-firing recently of a Hyunmoo-type ballistic missile with a range of 800 km at the Anheung test site of the Agency for Defense Development (ADD) under the wing of the Defense Ministry,” an informed source said. “It’s assessed that it was successful.”

Defense Minister Han Min-koo inspected the test, in which the missile met the key requirements of normal blast, flight and the accuracy of hitting a target, added the source.

But the ADD shortened the flight range, however, due to the space limit.

The Ministry of National Defense neither confirmed nor denied the reported success of the test.

“We have been developing a ballistic missile with a range of 800 km and a payload of 500 kilograms in accordance with the missile (development) guideline revised in 2012 between South Korea and the U.S.,” the ministry’s spokesman Moon Sang-gyun said at a daily press briefing, adding he can’t confirm details.

He was referring to Seoul’s deal with Washington to extend the range of its ballistic missiles up to 800 km, more than double the previous 300 km, to help counter the North’s saber-rattling. The maximum payload remains limited to 500 kg.

Asked about the name of the missile, Moon said it will be given an official one once it’s deployed.

It’s hard to predict the exact timing of the deployment of the missile still in the development phase, he added.

If deployed, the South’s new missile would cover all of North Korea even when fired from a southern region.

Fired from the southern island of Jeju, it is capable of reaching Sinuiju, a North Korean city bordering China.

The news of the successful test came a day after North Korea test-launched another mid-range ballistic missile into the East Sea.

The South’s military announced that it will constantly enhance its “deterrence capability” against the North’s nuclear and missile programs.

“(We) gravely warn that North Korea’s reckless provocation is a path toward the collapse of its regime,” the Joint Chiefs of Staff said in a statement. “Our troops maintain a firm posture for an immediate response to any kind of provocation by North Korea.”