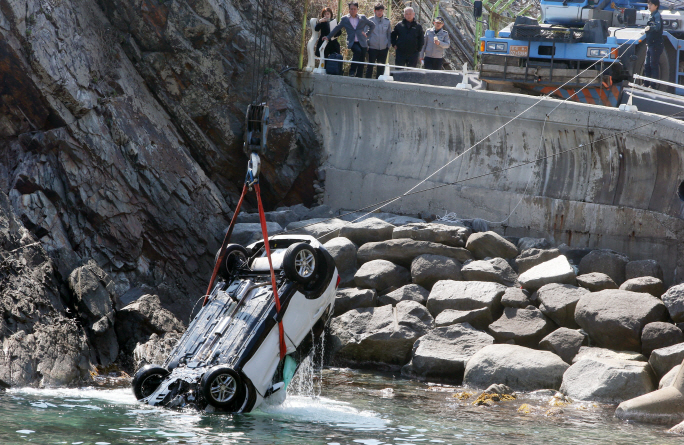 The Coast Guard pulls a white Hyundai Kona out of the water in the eastern coastal city of Gangneung on March 26, 2019, after the car fell into the sea with five people inside. Police said no one survived the crash. (Yonhap)

GANGNEUNG, Mar. 27 (Korea Bizwire) — Another loophole has been revealed in the lax vehicle rental method that allows people to make payments through mobile phone applications to take over vehicles without face-to-face interaction.

The loophole was once again brought to light by an accident in Gangneung, Gangwon Province, where a car crashed into the sea on Tuesday, killing five teenagers.

The policy for the car-sharing company in question is that the driver must be 21 years of age or older and have a driver’s license for one year or more before booking or using a car.

Thus, teenagers responsible for the accident were believed to have used the name of their 22-year-old neighbor to borrow a vehicle from a famous car-sharing company, police say.

The time of the car rental was from 4 a.m. to 7 p.m. on the day of the accident. About two hours later, at 6:31 a.m., the car used was found to have crashed into the sea on a coastal road near Gangneung.

The problem is that the car-sharing method lacks self-confirmation procedures in the process of renting a car compared to existing rental methods.

This is because anyone can rent vehicles from a remote location without having to check their driver’s license.

To solve the problem, the Ministry of Land, Infrastructure and Transport has been pushing since last year to introduce a device authentication system that allows reservations through the use of mobile phone devices registered when subscribing to car-sharing, but this system has yet to take effect.

Current car-sharing services allow users to use cars in parking lots on an hourly basis if they have a smartphone. It only certifies driver’s licenses when first registering users, and later allows drivers to drive only with an ID.

As a result, teenagers who used an adult’s ID caused an accident while driving a car-sharing vehicle.

Some point out that the government needs to improve its system by establishing a clause for punishment of those who lend car-sharing IDs in the Passenger Car Transport Business Act.