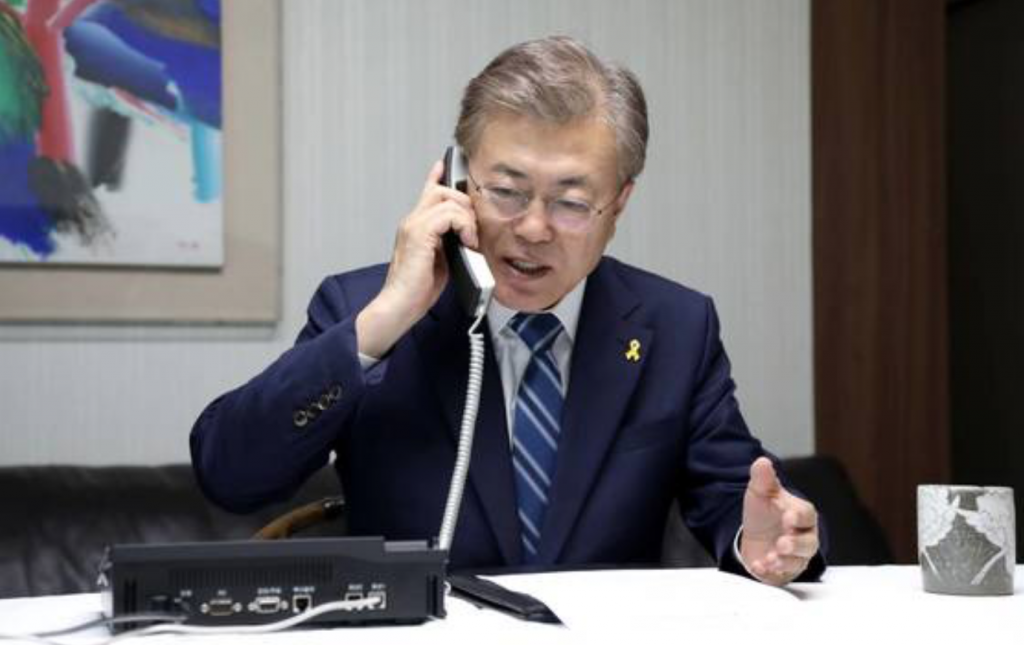 President Moon Jae-in holds a telephone conversation with Lee Sun-jin, Army general and chairman of the Joint Chiefs of Staff, at his home in Seoul on May 10, 2017. (image: Cheong Wa Dae)

SEOUL, May 10 (Korea Bizwire) – Moon Jae-in’s term as South Korea’s new head of state was officially launched early Wednesday, only one day after the nation held a rare presidential by-election.

Moon’s presidency began even before an inauguration ceremony as his election was a result of the rare by-election that sought to fill the top elected office vacated by former President Park Geun-hye.

The former conservative leader was removed on March 10 by a Constitutional Court ruling that upheld her parliamentary impeachment late last year over a series of corruption allegations that have also led to Park’s arrest and indictment.

Moon’s five-year term began at 8:09 a.m. Wednesday when the National Election Commission (NEC) confirmed his victory in the election held Tuesday, the commission said. The liberal candidate from the Democratic Party secured 13,423,800 votes, or 41.08 percent of the total 32,807,908 votes cast, according to the NEC.

A written certificate confirming Moon’s election was presented to the new president. The certificate was accepted by Rep. Ahn Gyu-back of the Democratic Party on his behalf.

Moon’s first order of business came from his role as the commander in chief.

“President Moon Jae-in began his official term as the 19th president as he exercised his legal authority as the commander in chief at 8:09 a.m. on May 10,” the presidential office said in a press release.

The office said Moon held a telephone conversation with Lee Sun-jin, Army general and chairman of the Joint Chiefs of Staff, and was briefed on the country’s current security conditions and possible military movements by communist North Korea.

He will soon pay a visit to Seoul’s national cemetery where he is expected to pay his respects to his late predecessors and war heroes.

Moon’s inauguration ceremony was scheduled to be held at the National Assembly at noon, where he is to be sworn in as the country’s 19th president.

Following the ceremony, Moon plans to meet with the leaders of the five parties with parliamentary seats. He will then announce his picks for prime minister, spy chief, chief of staff and chief of the presidential security service during a press briefing at the presidential office Cheong Wa Dae, the office said.