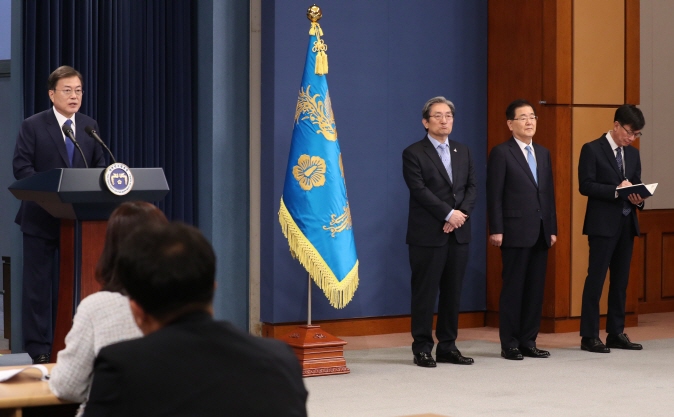 President Moon Jae-in (L) delivers a special address at the Cheong Wa Dae press briefing room on May 10, 2020, the third anniversary of his inauguration. (Yonhap)

In a special address delivered Sunday to mark the third anniversary of his inauguration, Moon said the government will “establish the cornerstone for an era of universal employment insurance.”

“We will work to quickly bring employment insurance to those currently without coverage – self-employed contract workers, platform workers, freelancers and artists, among others,” he explained.

The need for universal employment insurance first came up after the coronavirus outbreak, when irregular workers, the self-employed, and other vulnerable groups fell victim to the devastation in the job market, spotlighting the need for a minimum safety net to protect all workers.

The key part of universal employment insurance lies in securing livelihood of people suffering from unemployment or income fluctuations.

Freelancers and other non-salaried workers have refused to pay employment insurance premiums for financial reasons.

The self-employed and small businesses, too, are staying away from employment insurance since they have to pay for the entire cost of the insurance. Salaried workers share the cost of insurance with their employers.

There are an estimated 15 million South Koreans who are not covered by employment insurance.

The Korean ‘New Deal’, a national project to create jobs by investing in digital infrastructure, is also based on a rising perception that an universal employment safety net is in order.

The president declared his intent to blaze a trail in the post-COVID-19 era with a pace-setting economy as well as to push for the introduction of universal employment insurance, a will to set up an employment safety net amid a period of economic transition.

“Expanding the employment safety net is an essential task to bolster our economy’s dynamism,” Moon said.

He also made it clear that the universal employment insurance will come phase-by-phase through social agreement on eligibility for the insurance program.

Establishing an inclusive platform to allow more people to enjoy the benefits of an employment safety net is the main focus of the president’s administration.