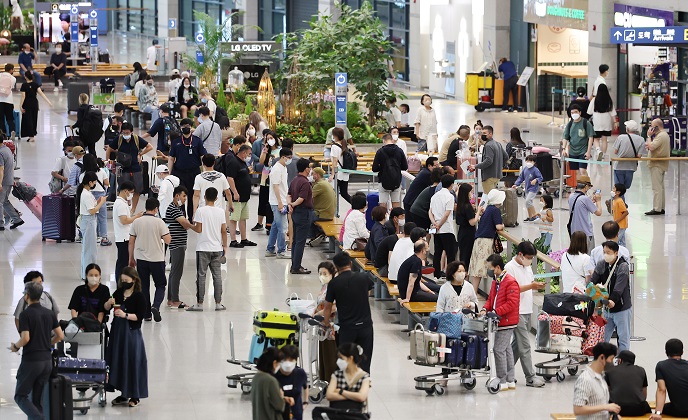 Incheon International Airport, west of Seoul, is crowded with passengers on July 6, 2022. (Yonhap)

The amount of money spent overseas by South Koreans with cards, including credit and debit cards, came to US$3.81 billion in the July-September period, up 4.1 percent from the previous quarter, according to the data from the Bank of Korea (BOK).

Compared with a year earlier, the consumption jumped 32.6 percent.

The latest data marked the second straight quarter of a rise but a slower pace of growth from a 19.6 percent jump registered three months earlier.

Outbound travel has been on the rise as countries have eased their long-enforced coronavirus restrictions.

The number of outbound travelers came to nearly 2 million in the third quarter, a sharp increase from the previous quarter’s 944,000, the data showed.

The won’s slide against the U.S. dollar, however, weighed on consumption on online shopping.

The daily average of the dollar-won exchange rate stood at 1,338.0 won in the third quarter, up 6.2 percent from three months earlier, the data showed.

A higher exchange rate means less value in the local currency and less purchasing power outside of the country.