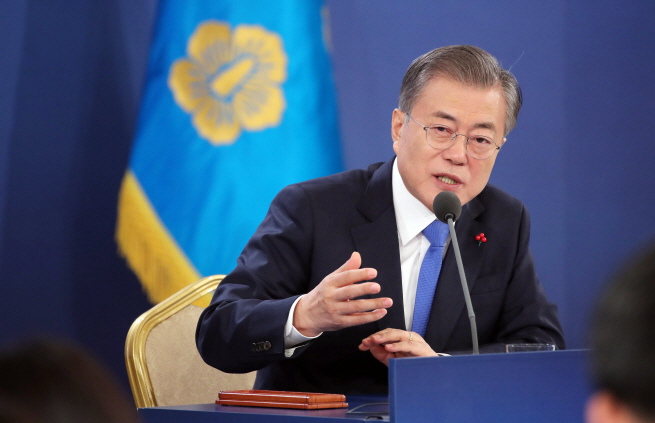 SEOUL, Jan. 10 (Korea Bizwire) — President Moon Jae-in said Thursday that he plans to stick to his economic policies that are being criticized amid the slowing economy and tepid job creation, citing the need for sustainable growth.

The president said that the government will make up for shortfalls if needed but that it will maintain its economic policy line — promoting income-driven growth, innovation-led growth and a fair economy.

“During my New Year’s address, I’ve mentioned why the government’s policy line should be maintained, and it is impossible to post sustainable growth without changing the structure of polarization and income inequality,” Moon told a press conference held at his office Cheong Wa Dae.

“If needed, we are open to making up for (what’s lacking), but I’ve fully explained that the government’s policy line will be maintained.”

In a related move, the government has hiked the minimum wage by double-digit percentages twice, but the move has had the unintended effect of hampering job growth as smaller firms have dismissed many part-time workers.

Moon acknowledged that a series of hikes in the minimum wage appears to have had some negative effects on smaller shop owners.

“(The government) plans to strengthen measures for small merchants who have been hurt by the rise in wages,” Moon said.

“I don’t think that the increase in the wage is to blame for deteriorating job data, although it may have some impact on the job situation, in particular for small merchants and self-employed people,” he noted.

Moon also called for the labor sector’s cooperation with the government’s labor policy.

Tensions between a major labor group and the government have increased due to the government’s decision to change its calculation of minimum wages and operate the new 52-hour workweek system flexibly.

The president said that an improvement in workers’ livelihoods is possible when the economy fares well.

“A rise in workers’ wages itself is good, but it may become an additional pain for the workers should the increase affect other economic aspects and leave our economy worse off instead,” Moon said. 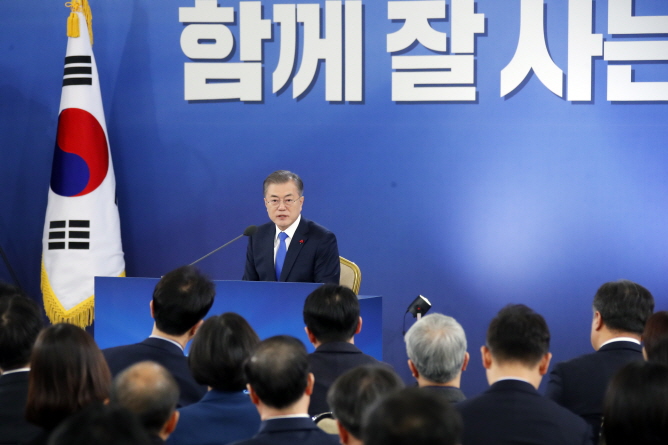 Moon also vowed to improve the quality and quantity of employment this year as he acknowledged that weak job data did not meet public expectations.

“The most important task of the government is how to handle (the employment issue),” Moon said.

South Korea’s jobless rate stood at 3.8 percent in 2018, the highest since 2001 when the corresponding figure came to 4 percent, according to data compiled by Statistics Korea.

South Korea is set to increase the number of all-electric and hydrogen fuel-cell electric vehicles to 430,000 units and 67,000 units, respectively, by 2020. It also said 2,000 hydrogen-powered buses are set to be supplied in a move to promote zero-emission vehicles.

A hydrogen fuel-cell electric car only emits water vapor as it converts stored hydrogen into electricity, which turns the vehicle’s motor.

Moon said the government will spend 1.5 trillion won (US$1.3 billion) on data, artificial intelligence and the “hydrogen economy” to stimulate overall economic growth.

The Federation of Korean Industries, South Korea’s biggest business lobby, which speaks for large companies, said it is on the same page with Moon on the need for innovation to tide the country over through its economic difficulties.

“Innovation-based growth is a must for our survival in the era of unlimited global competition, not a choice,” Bae Sang-kun, a senior official at the federation, said.

Bae called for the lifting of regulations and asked companies to make a greater effort to boost investment and create jobs.