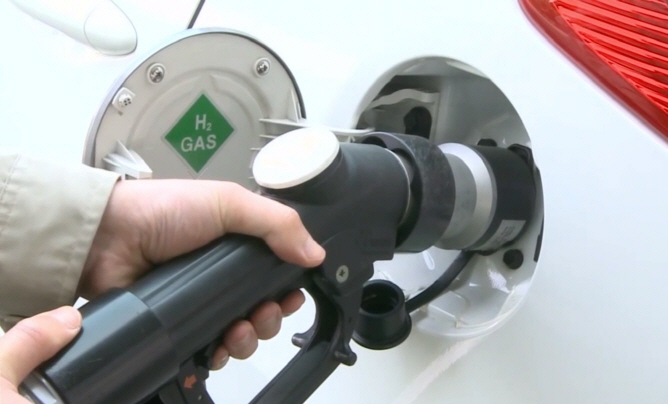 SEOUL, May 20 (Korea Bizwire) — South Korea said Wednesday it aims to supply hydrogen fuel-cell electric trucks in 2023 following a two-year test project as it strives to use hydrogen vehicles in the non-passenger transportation sector as well.

The trade, environment, transport ministries, and the nation’s leading logistics firms have signed a memorandum of understanding with Hyundai Motor Co. to improve the hydrogen trucks’ driving performance and safety features from 2021 to 2022, the ministries said in a joint statement.

Logistics firms, such as CJ Logistics Corp., Hyundai Glovis Co. and Coupang Inc., the country’s leading e-commerce operator, joined the move as they are planning to replace their existing diesel-powered cargo trucks with hydrogen ones, it said.

Hyundai plans to place five hydrogen trucks in the two-year pilot program and the ministries will join forces to strengthen the hydrogen charging infrastructure for the promotion of hydrogen vehicles in line with the government’s broader hydrogen economy roadmap.

Hyundai, which currently exports 10-ton hydrogen trucks to Switzerland, plans to launch a localized version of the truck in the domestic market in 2021.

Hydrogen is an environment friendly alternative to fossil fuels, as automobiles running on it only create water in the process of generating power.

It can be produced by processing liquefied natural gas or as a by-product of industrial facilities, including petrochemical plants.

South Korea aims to more than double its share of the world’s all-electric and hydrogen-powered vehicle market to 10 percent by 2030 as it strives to foster future mobility as its new growth driver.

To help spread zero-emission and autonomous cars across the country, the government plans to inject 2.2 trillion won (US$1.9 billion) by 2030, with a plan to have the private sector separately invest 60 trillion won in future vehicles, related technologies and facilities.

Hyundai Motor Group will take up 41 trillion won, or 68 percent of the 60 trillion won, under the government-led future mobility plan, the trade ministry said.

On the passenger vehicle side, Hyundai aims to sell 10,100 units of its only hydrogen model Nexo in the domestic market this year, jumping from 4,194 units last year.

It aims to establish a production facility capable of rolling out 50,000 hydrogen-powered passenger vehicles a year by 2030. It also targets sales of 200,000 hydrogen fuel cell systems a year in global markets by the same year.