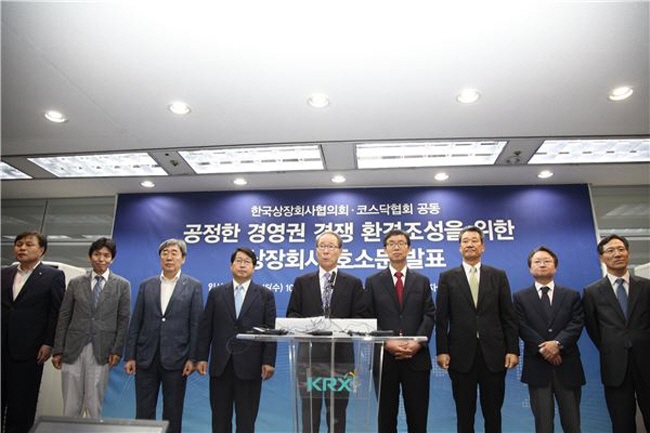 The Korea Listed Companies Association urged policymakers to revise the commercial law to introduce protective measures, such as “poison pills” and “golden shares,” to ward off unsolicited takeover bids by corporate raiders.

In the face of “vulture” investors, poison pills would give shareholders the right to buy new shares quickly at a discount, while golden shares would allow its holders to object to unfavorable bids, the association said.

“The current M&amp;A law favors attackers, while it disadvantages protectors,” the association said. “Except the share buyback, there rarely is any measure company owners can use to protect their management right.”

The hedge fund has aggressively lobbied foreign investors and minority stakeholders, and filed two injunction requests against the merger ahead of Friday’s crucial shareholder meeting. Both injunctions were rejected by a Seoul court.

Out of 1,820 companies listed on the main KOSPI and the secondary KOSDAQ markets, 134 were considered susceptible to unsolicited bids with major shareholders holding less than 33 percent and the foreign stock ownership reaching over 10 percent, a survey by the association showed.

Past revision bills, however, fell through due to a lack of public support for the nation’s family-run conglomerates, which are often criticized for their opaque corporate governance and management style.