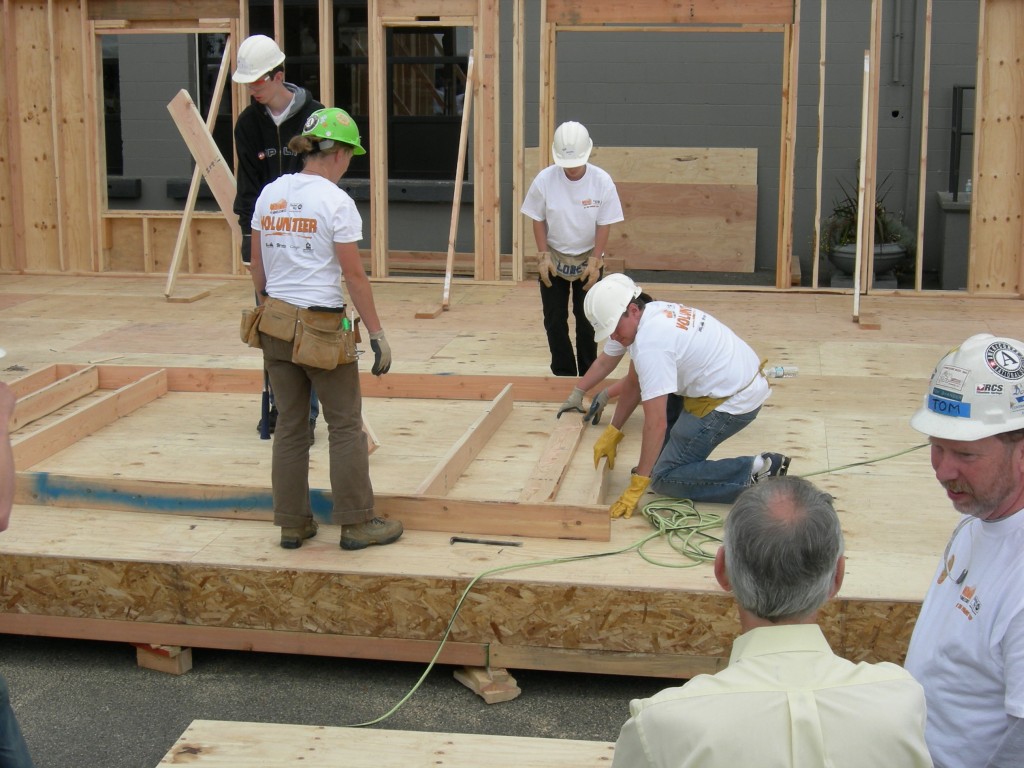 “Moving into a decent home breaks the cycle of poverty, leading to better health, and improved education and employment opportunities. Young people across Asia are determined to help people make that break and create a world where everyone has a decent place to live,” continued Hathaway.

To find out more about Habitat Youth BUILD and donate, visitwww.habitatyouthbuild.org.

In Cambodia, 1,200 volunteers worked alongside rapper and artist Pou Khlaing to help build homes and develop a new community for families currently living on a dumpsite in Phnom Penh. Five thousand students also took part in events to raise awareness across the country.

In Bangladesh, more than 125 volunteers built homes for seven families in Savar, and international school students worked on building a house in Sarawak, Malaysia. In South Korea, volunteers tidied and improved neighborhoods, and developed a social media app so local volunteers could send messages to Habitat Youth BUILD volunteers in other countries. More than 1,000 volunteers built homes across four sites in India.

A flash mob in Jakarta, Indonesia, drew huge crowds and participants. Habitat for Humanity Indonesia the support of Whulandary Herman, Miss Indonesia 2013, and ran an online photo competition asking entrants to visually express what a home means to them.

In Japan, more than 200 student volunteers secured donations from over 1,000 people on the streets of Tokyo, Kyoto, Hiroshima and Oita. Yet more people participated in a workshop in Tohoku, to discuss continued support for families affected by the 2011 earthquake and tsunami – particularly those still living in temporary shelters.

Takuma Kanzaki, 19, a sophomore from Nihon University Campus Chapter, led a street fundraising team which invited donors to develop pictures using origami paper. “We do not want people to forget about those affected families by Typhoon Haiyan or the Japan 2011 tsunami disaster,” said Kanzaki.

Musical duo Scrubb led the way in Thailand in April, as 500 people amassed to clean and paint a community center in Bangkok, and wrapped up the day with a mini concert.

Youth in 11 countries – Bangladesh, China, Cambodia, India, Indonesia, Japan, Malaysia, Nepal, Philippines, South Korea and Thailand – have been campaigning on- and offline to garner support for the Habitat Youth BUILD movement since February 2014. Build experiences, awareness and fundraising activities have been taking place across the Asia-Pacific region, culminating in mass-participation events at numerous sites, across multiple countries, on 3 May.

Habitat for Humanity Youth BUILD 2014 is a movement to raise awareness of the terrible poverty housing situation in the Asia-Pacific region and grow support for the vision of a world where everyone has a decent place to live. It calls for concerned young people to take action together to build homes and communities, on a Habitat build site and online through their social networks.www.habitatyouthbuild.org

About Habitat for Humanity International

Habitat for Humanity International’s vision is a world where everyone has a decent place to live. Anchored by the conviction that housing provides a critical foundation for breaking the cycle of poverty, Habitat has helped more than 4 million people construct, rehabilitate or preserve homes since 1976. Habitat also advocates to improve access to decent and affordable shelter and supports a variety of funding models that enable families with limited resources to make needed improvements on their homes as their time and resources allow. As a nonprofit Christian housing organization, Habitat works in more than 70 countries and welcomes people of all races, religions and nationalities to partner in its mission. Habitat has supported an estimated 1.5 million individuals in the Asia-Pacific region, where it has been active since 1983. To get more information, to donate or to volunteer, please visitwww.habitat.org/asiapacific or follow us at http://www.facebook.com/habitat.