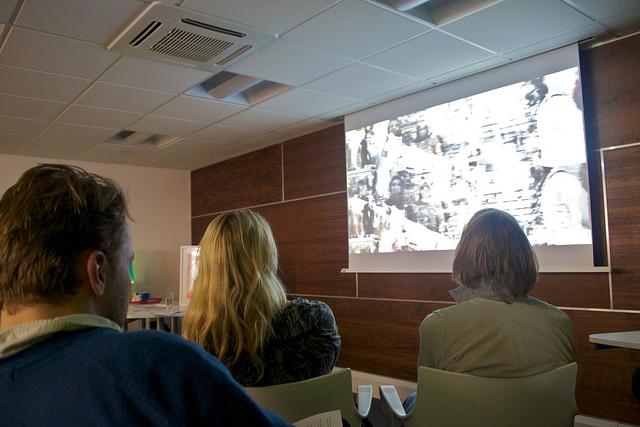 Movie watching can be an excellent tool for kids to learn as well as to heal traumatized minds. (image credit: adders @ flickr)

GOYANG, South Korea, Sept 24 (Korea Bizwire) – Lately a book titled “You Can Peek into Our Children’s Mind If You Watch Movies with Them” is gaining attention among parents. The book, written by an elementary school teacher, argues that movie watching can be an excellent tool for kids to learn as well as to heal traumatized minds. Cha Seung-min, the teacher at Jeonan Elementary School in Changwon, South Jeolla Province, has begun his movie watching method about ten years ago when he led classes watching films with his students.

“I believe the best way to prevent school violence is movie-watching education. Instead of doing something after the fact or suppressing the kids’ discontent, it is much better to vent their anger and allow them to think back for themselves through the means of movie,” he said. Indeed, according to Mr. Cha, he has had so many encounters with his students who confessed later that they identified with the characters in movies.

It is almost same with the children visiting the Green Apple Cinema for Kids, the movie theater network with five locations across the country, who tend to be much more forthcoming about themselves after watching movies. Usually kids don’t like to reveal what they really think for fears of scolding or being ridiculed. Once they view a movie, however, they quickly change, talking about what the movie character would do, think, and react, which is really what they would do, think, and react. After all, these are all about them, not the movie characters.

Mr. Cha also said in his book, “Unlike video games, movies don’t stimulate the children’s emotions too intensely while making them focus naturally. If the children are exposed to the experience of feeling something poignant in their heart several times, they could become someone different.”

The Green Apple Cinema held in May an event to invite 30 children in a special program in which they undergo a series of movie watching sessions and were tested how their imaginativeness and concentration improved through the exercise. For further information on the movie theater, visit the Green Apple Kidtainment website at www.greenapple.co.kr.