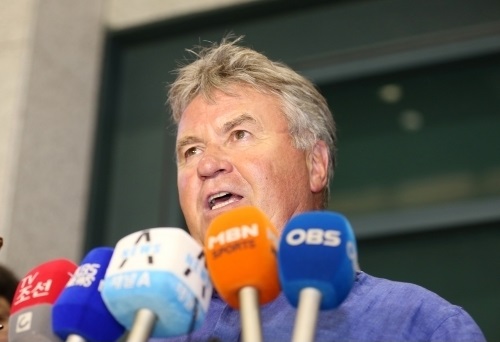 SEOUL, July 27 (Korea Bizwire) – Guus Hiddink, the Dutch soccer manager better known among Koreans as the national hero who took Team Korea to a historic fourth place finish in the 2002 World Cup, came back to Korea to participate in the K-League All-star game to be held at 8 pm on July 25.

Before the game, he underwent a surgery on his knees for arthritic conditions at Seoul JS Hospital using stem cell drug Cartistem. On the same day, he met Moon Hyungpyo, the Minister of Health and Welfare, who asked about his surgery results.

Mr. Hiddink said he opted for the stem cell-based treatment from Korea as patients with total knee arthroplasty (total knee replacement surgery) may have problem running and walking later. According to his doctor, Cartistem was used for the surgery and MRI results showed a sizable amount of the cartilage has been grown in the treated parts.

After the meeting with the minister, he was awarded a plaque in appreciation of his charity work through the Guus Hiddink Foundation, including the establishment of the “Hiddink Dream Field Futsal Stadium” in Jeju Island for the visually impaired.

The July 25 All-star game held at the Seoul World Cup Stadium in northwest Seoul was between Team K-League and Team “Park Ji-sung” headed by Hwang Sun-hong and Guus Hiddink, respectively.