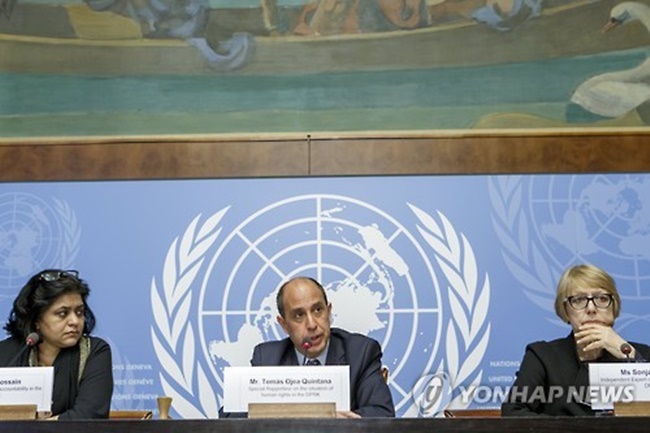 Argentinian Tomas Ojea Quintana (C), U.N. Special Rapporteur on the situation of human rights in North Korea, holds a press conference after the presentation of a report on the human rights situation in North Korea at the session of the Human Rights Council in Geneva on March 13, 2017. (Image: EPA-Yonhap)

SEOUL, March 24 (Korea Bizwire) – North Korea on Friday continued its daily condemnations of alleged U.S. human rights abuses especially ahead of the adoption of a resolution on its human rights conditions at the U.N. Human Rights Council in Geneva.

“The United States is disqualified to play the role of a human rights judge,” the Rodong Sinmun, a daily of the North’s ruling Workers’ Party, said in a commentary titled “The U.S. World’s Worst Human Rights Abuser.”

The U.S. State Department’s latest country report on human rights practices, which took issue with other countries’ human rights conditions, is a ridiculous act given the U.S. itself is full of hard-to-solve human rights issues, the paper criticized.

“It’s the anti-human rights nature of the money-dominated U.S. election that a handful of the privileged are mocking the political rights of the masses through a game of power,” the paper said.

The paper also berated the abuse of guns and racial discrimination in the U.S.

“It is none other than the U.S., chieftain of invasion and mass-killing, which caused the worst-ever refugee crisis in the Middle East under the pretext of ‘anti-terror war,’” the paper said.

The paper derided the country report, saying, “The successive U.S. administrations release reports on human rights as national treasure, though they are considered by the international community as waste papers.”

In recent days, the paper continuously played up stories critical of Trump’s anti-immigration policy as well.’