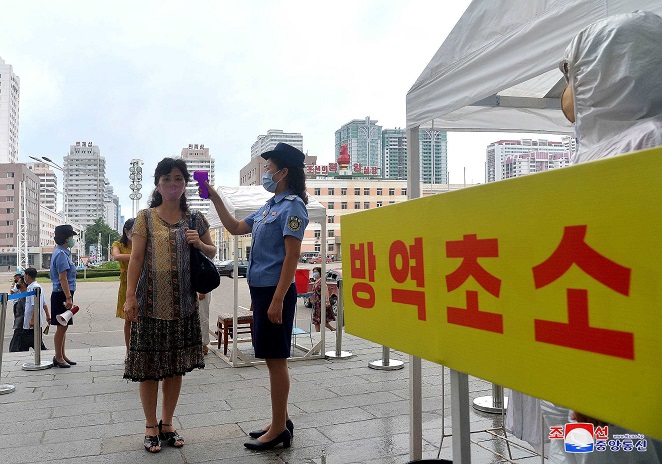 This photo, released by the North’s Korean Central News Agency on Aug. 29, 2020, shows an official taking a citizen’s temperature at Pyongyang Station in the capital to prevent the outbreak of the coronavirus.

SEOUL, Sept. 26 (Korea Bizwire) — North Korea’s state media highlighted its rigorous border control to stave off the new coronavirus Saturday, amid tensions following the shooting death of a South Korean national floating in its waters near the inter-Korean border.

The Korean Central News Agency (KCNA) said the country is carrying out perfect border control and aggressive measures to “preemptively deal with the pandemic.”

“Well aware that key to prevention of infectious diseases in borders, coastlines and demarcation lines is shutdown and containment, we’ve been promoting the people’s awareness and strengthening control,” the agency said.

“In order to prevent even 0.001 percent of chances of mistake by any workers, we’ve maintained a stern control and instruction system,” it added.

Pyongyang claims there has not been a single COVID-19 case in the country. The communist country closed its border with China in January and issued the maximum emergency level against the virus in July.

It is not known if the same orders have been in place for cases near the inter-Korean border areas, but North Korean troops shot and killed a South Korean fisheries official who was drifting in its Yellow Sea waters Tuesday.

The regime claimed they then set alight the object he was using to stay afloat in accordance with the national emergency quarantine regulations.

The North apologized to South Korea on Friday over the incident, but its media outlets have yet to report on the killing.