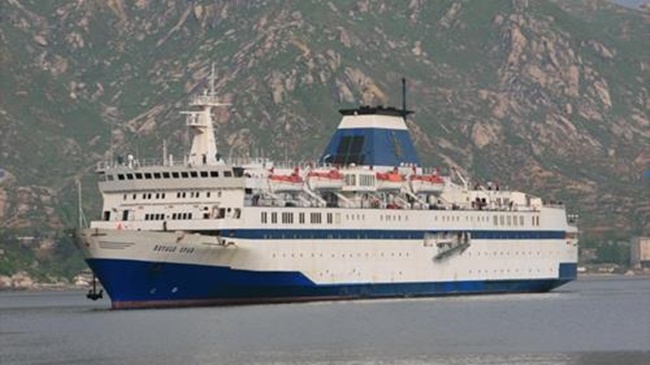 Photo of a passenger ship that was included in North Korea’s investment notice posted in the country’s website Kumgangsan. (Image: Yonhap)

Its website promoting Mt. Kumgang recently posted an investment guideline for a ferry business based in the port of Kosong near the mountain. A South Korean company had exclusively run a tour program to the North Korean mountain resort area for 10 years before it was halted in July 2008 after a North Korean soldier killed a South Korean tourist there.

The guideline said a foreign company or a consortium would be entitled to operate a tourist ship with an investment of US$10-20 million over the next 10 years.

The program will run on two routes — one linking the mountain resort to the Russian city of Vladivostok and the other to Southeast Asia. It also promises special permission to run a casino on the ship.

“The passenger ship will be equipped with various amenities to allow cultural and safe travel for about 1,000 travelers,” the guideline said. “There is a plan to allow a casino business there.”
The post said North Korea seeks to broaden and diversify international tourism connected to the mountain.

“The tour ship will be guaranteed favorable conditions for economic activities in line with the law on Mt. Kumgang, a special international tourism zone,” said the guideline.

Lim Eul-chul, a professor at the Institute for Far East Studies at Kyungnam University in South Korea, said North Korea’s permission for a casino business is a very unconventional proposal. It seems to be aimed at securing foreign currency at a time when United Nations sanctions are squeezing the country’s dollar earnings, he said.

In a separate post, the North Korean website also invites foreign investment of $500,000 in a joint project to develop a tourist resort around Lake Samilpo in return for rights to run the business over a period of 15 years.

It is unclear, however, if North Korea could find foreign investors for the investment proposals amid tightening international sanctions over the country’s nuclear tests and repeated ballistic missile launches since last year.’