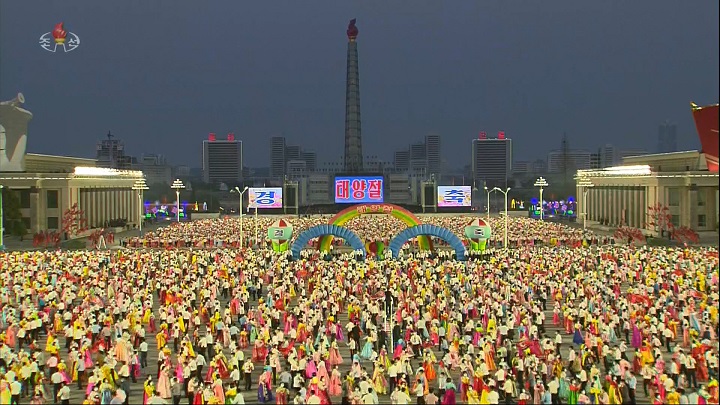 Throngs of masked North Koreans staged large-scale dance celebrations at Kim Il-sung Square in Pyongyang to mark the Day of the Sun holiday, according to the 20-minute live broadcast from 7:10 p.m. by the North’s state-run Korean Central Television.

Fireworks were set off over the banks of the Taedong River centered on the Tower of the Juche Idea in the capital, it added, with other similar events being staged across the nation.

As the North usually marks every fifth and tenth political anniversaries with major celebrations, Kim Jong-un, the North’s leader and grandson of the late founder, was expected to attend the event in a move to rally internal unity.

He previously appeared at military parades that marked the 100th and 105th birth anniversaries of his late grandfather in 2012 and 2017, respectively.

South Korea’s military and intelligence authorities had not predicted a military parade for this year’s anniversary, but a government source said the North was likely to hold a mass rally in the evening.

The sources said the North broadcasted the event live in an apparent move to rev up a festive mood. The country prefers broadcasting recorded events. 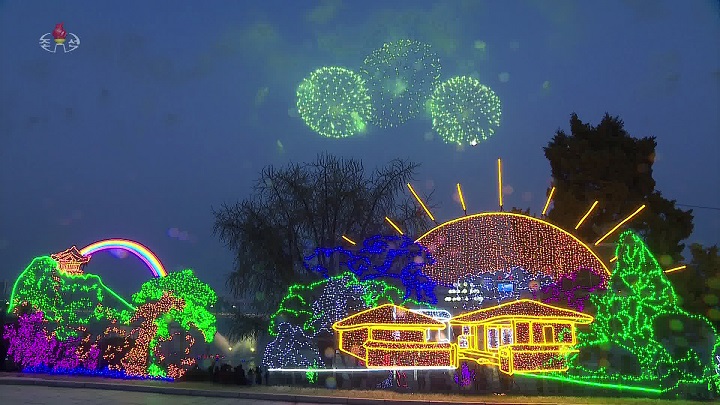 Earlier in the day, Cha Duck-chul, the acting spokesperson for Seoul’s unification ministry, told reporters in a regular briefing that the government is closely watching for moves related to preparations for a military parade.

“(The North) has yet to mention matters related to the opening of a military parade,” he said, adding that the ministry is also considering the possibility of such a parade taking place in time for the founding anniversary of the North Korean People’s Revolutionary Army on April 25.

Meanwhile, Pyongyang has revved up a festive mood for the late founder’s birthday, kicking off a light festival Thursday.

Various light sculptures of national symbols, including the country’s highest peak Mount Paektu, were installed at Kim Il-sung Square for the festival that will run until Sunday, according to the Korean Central News Agency.

The North also held a music concert and a celebratory ball in the capital the previous day to mark the landmark anniversary, and issued commemorative stamps of its late leader, it said.