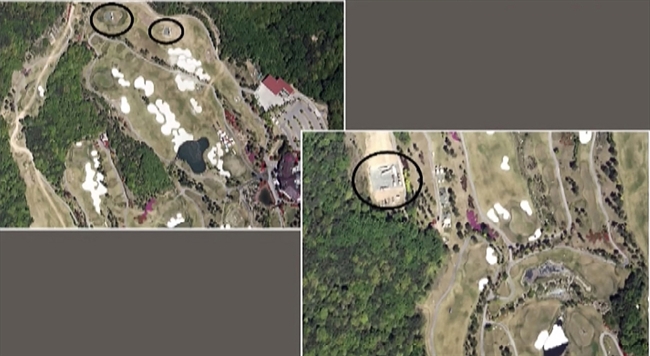 North Korea’s Korean Central TV Broadcasting Station released what it claims are satellite images of the Terminal High Altitude Area Defense system deployed in South Korea’s Seongju county on May 8, 2017. (For Use Only in the Republic of Korea. No Redistribution) (image: Yonhap)

SEOUL, May 11 (Korea Bizwire) — North Korea has unveiled what it claims are satellite images of the Terminal High Altitude Area Defense (THAAD) system recently deployed in South Korea, a move aimed at flaunting the country’s capability to gather intelligence against Seoul.

The North’s state-run Korean Central TV Broadcasting Station aired two pictures showing what were described as THAAD components installed at a golf course at the southern South Korean county of Seongju during a TV talk show aired on Monday.

“The satellite pictures show the THAAD (missile) launcher is currently deployed near the northern ridge of the Seongju golf course while the X-band radar and other auxiliary equipment are installed near the western ridge from the center,” the broadcast said.

The North Korean photos captured in Seoul showed what the North claimed as the THAAD launcher and radar in black circles.

But if they truly represent the deployment site in South Korea and where the North got the imagery are not clear from the information given in the broadcast. It did not elaborate on when or how the photos were taken.

Observers said broadcasting the alleged satellite photos may be intended to exert military pressure on Seoul by showing off the regime’s intelligence-gathering capability.

“THAAD is a source of a nuclear disaster being brought to our race at the moment,” the broadcast said, also adding that the deployment will “turn the Korean Peninsula as a battlefield for a nuclear war among powerful countries.”

The TV program also accused the U.S. of speeding up the deployment before the conservative government in South Korea handed over its power.

About two weeks before the presidential election on Tuesday, Seoul and Washington brought in the X-band radar and missile launchers, key THAAD components, to the host site in Seongju county.

After winning this week’s presidential election, President Moon Jae-in said he will “seriously negotiate with the U.S. and China” to solve issues surrounding the deployment after campaigning to revisit the deployment agreement forged under former President Park Geun-hye.