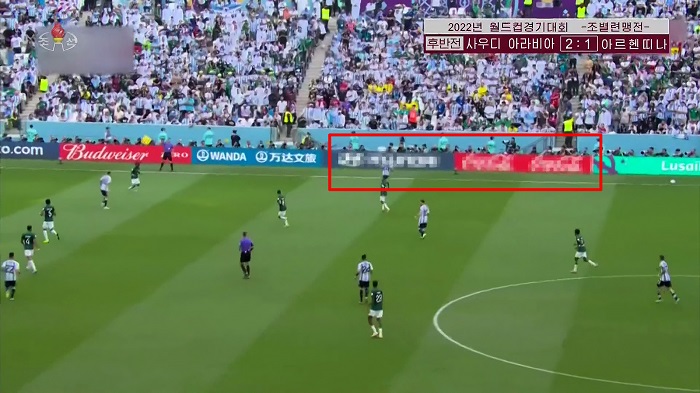 This photo capture of the North’s Korean Central TV shows a broadcast of the Saudi Arabia-Argentina match at the FIFA World Cup at Lusail Stadium in Lusail, just north of Doha on Nov. 22, 2022. (Yonhap)

SEOUL, Nov. 25 (Korea Bizwire) — North Korea’s state broadcaster covered the South Korea’s national flag with a blur as it broadcasted the 2022 FIFA World Cup as part of its policy of excluding reports on Seoul that may undermine the regime.

In the video, football fans were seen putting up flags from various countries, among which the South Korean flag was covered in grey.

The advertisement screen that surrounded the football field showed Hyundai Motor Co.’s all-electric IONIQ 5 and IONIQ 6. KCTV took out the letters from the ads to make them unrecognizable.

The recorded video of Saudi Arabia versus Argentina was also broadcasted on the same day with ads from Hyundai Motor and Coca-Cola removed by KCTV.

The move is seen as an intent to hide the fact from North Korean residents that companies in South Korea and the U.S. are big enough to put up ads during the World Cup.

North Koreans were known to be aware of Hyundai’s international stature after witnessing the carmaker’s shuttle buses that once operated in the now-suspended Kaesong Industrial Complex.