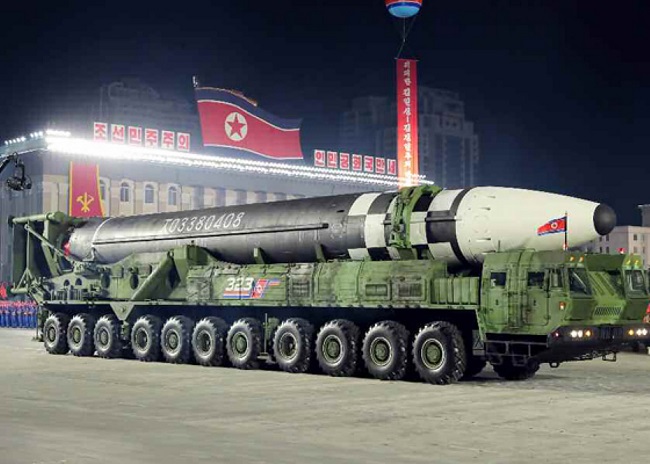 Shown in this image captured from Korean Central Television footage on Oct. 10, 2020, is North Korea’s new intercontinental ballistic missile (ICBM), which was displayed during a military parade held in Pyongyang to mark the 75th founding anniversary of the ruling Workers’ Party.

In a parade held in Pyongyang on Saturday, North Korea unveiled the new ICBM that was carried on a transporter erector launcher (TEL) with 22 wheels, compared with the Hwasong-15, which is moved by an 18-wheel TEL.

Experts said an increase in the number of wheels and a longer body indicates that the missile’s weight is heavier than the previous model.

“The nine axles on Hwasong-15′s TEL were arranged with spaces in between, while the 11 axles in the new ICBM were built close to one another,” said professor Chang Young-keun at Korea Aerospace University.

“The TEL’s design indicates that the overall weight of the missile has increased.”

Chang said while the number of axles has risen to 11, the total length is unlikely to have increased substantially as the axles were arranged close to one another.

“While a thorough analysis is needed, the TV footage showed that the length increased by 1-2 meters and the diameter by 30-40 centimeters,” Chang explained.

Considering that the Hwasong-15 is 21 meters long, the new ICBM, which military officials called an upgraded version of the Hwasong-15 or Hwasong-16, is likely to measure 22-23 m or 23-24 m in length.

Chang, meanwhile, attributed the bigger diameter to an update in the missile’s engines.

“The new ICBM is a liquid fuel missile. There are two pairs of engines in the first stage and the second stage likely features new engines that (the North) tested twice in December last year,” he said. 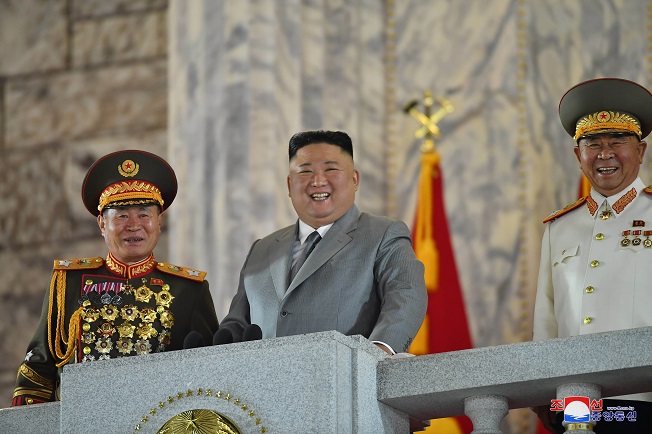 North Korean leader Kim Jong-un (C) attends a military parade to mark the 75th founding anniversary of the ruling Workers’ Party, held in Pyongyang on Oct. 10, 2020, in this photo captured from the Korean Central Television.

North Korea conducted two rocket engine tests at its Sohae Satellite Launching Station, better known as the Dongchang-ri site, on Dec. 7 and 13, claiming the tests would have an important impact on changing its strategic position and bolstering its “reliable strategic nuclear deterrent.”

The professor also mentioned a change in the ICBM’s front part, which appeared relatively sharp, compared with the round and blunt shape of the Hwasong-15.

“The reason that the missile’s length is longer is because a post-boost vehicle (PBV) has been installed at the front,” he said, calling it “a new technology.”

PBV is considered a key technology in developing a multi-warhead system that would theoretically enable Pyongyang to simultaneously attack Washington, D.C. and New York.

With the latest changes, the new ICBM was expected to fly equivalently or farther than the Hwasong-15, which has an estimated range of 8,000 miles, or 12,874 kilometers, capable of striking any part of the continental U.S.

“Compared with the Pukguksong-1, the diameter has increased by two to three times, while its length appeared shorter to enable it to be launched from submarines,” said Shin Jong-woo, a senior analyst at the Korea Defense Security Forum.

The new version is predicted to have been built for a new submarine that has been under construction at North Korea’s naval base in Sinpo on its east coast.

The new submarine, believed to be a 3,000-ton one, is widely known to be capable of carrying three to four SLBMs.

North Korea had been widely expected to roll out “new strategic weapons,” such as an ICBM or an SLBM, that leader Kim Jong-un pledged to show off in his New Year’s Day message, amid stalled denuclearization talks with the United States.