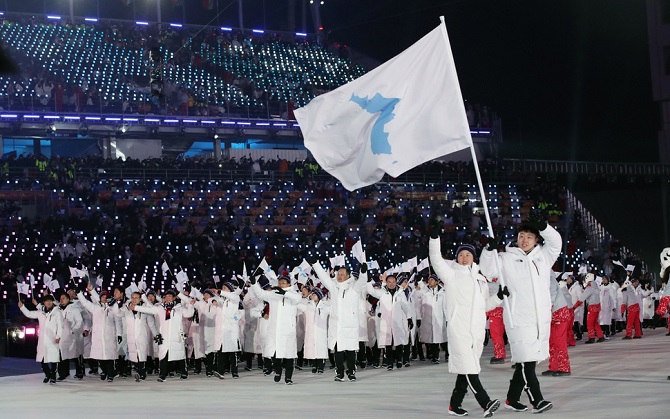 This file photo shows South and North Korean athletes marching together at the opening ceremony of the 2018 PyeongChang Winter Olympic Games in PyeongChang, 182 kilometers east of Seoul, on Feb. 9, 2018, while carrying a flag symbolizing a unified Korean Peninsula. The North’s sports ministry said on its homepage on April 6, 2021, that the North will not participate in the Tokyo Olympic Games set for July 23-Aug. 8 due to concerns over the coronavirus pandemic. (Yonhap)

SEOUL, Sept. 11 (Korea Bizwire) — The International Olympic Committee (IOC)’s recent suspension of North Korea until the end of next year is dealing yet another dispiriting blow to South Korea’s efforts to use sports diplomacy to reengage with Pyongyang, experts said Friday.

The suspension came as Seoul has been angling for top-level inter-Korean engagement during the 2022 Beijing Winter Olympics while struggling to resume dialogue with Pyongyang through humanitarian assistance and other incentives.

Earlier this week, the IOC announced the suspension of the North’s national Olympic committee for having unilaterally skipped the Tokyo Olympics.

The decision will bar the North from competing in the Beijing Games slated for February, though the IOC noted its “right to reconsider the duration of the suspension at its discretion.”

“Current conditions appear to make it difficult for South Korea or other countries to use the Olympics to reach out to the North though it would have been a good opportunity,” Lim Eul-chul, a professor at the Institute for Far Eastern Studies at Kyungnam University, said.

The suspension dimmed the prospects of South Korean President Moon Jae-in seizing the Winter Games to make progress in his vaunted drive for peace before the end of his five-year term in May next year, as he did during the 2018 PyeongChang Olympics.

During the PyeongChang Games, the visit by high-level North Korean delegates, including Kim Yo-jong, the powerful sister of leader Kim Jong-un, paved the way for a cross-border thaw and set Moon’s peace initiative in high gear.

The mood of cross-border rapprochement led to a series of summit meetings between Moon and leader Kim, as well as historic talks between Kim and then U.S. President Donald Trump, the first-ever summit between the two Cold War foes.

Seoul had pushed to use the Tokyo Olympics to salvage the peace process with Pyongyang, but the efforts ran aground when the North announced its decision to pull out of the games, citing coronavirus concerns. 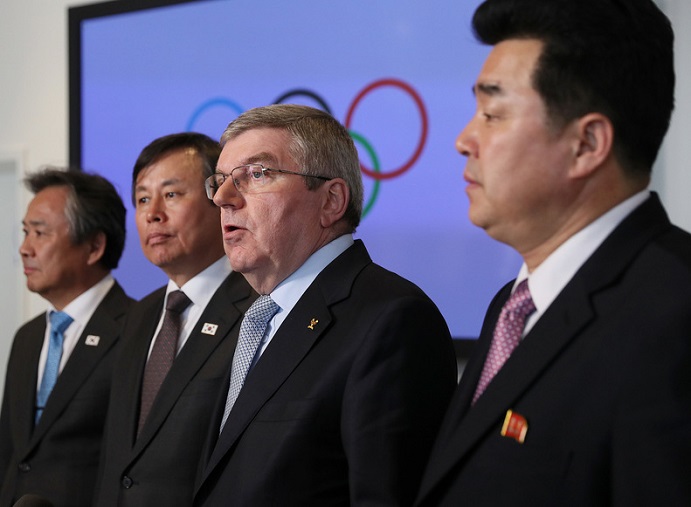 The latest setback came in the midst of growing skepticism over Moon’s outreach to the North, as the International Atomic Energy Agency has recently reported signs of the reclusive regime reactivating a key plutonium producing nuclear reactor at its main Yongbyon complex.

Washington’s preoccupation with its troop withdrawal from Afghanistan and other pressing policy tasks has also raised doubts over whether full-fledged engagement with Pyongyang could come in the coming months.

Despite rising concerns that the IOC suspension may bode ill for Moon’s peace crusade, the presidential office Cheong Wa Dae vowed to double down on his efforts for lasting peace on the divided peninsula.

“The government will continue efforts to find ways for sports exchanges through various occasions and for progress in the efforts for peace on the Korean Peninsula,” a presidential official told reporters earlier this week.

Experts see little chance of any immediate turnaround in inter-Korean relations, citing a series of challenges, such as the North’s domestic hardships and the unfavorable political environment in the South ahead of its presidential poll in March next year.

“South Korea, as well as the United States and the international community, will attempt to drive up the peace process, but the North is unlikely to respond as it is faced with unfavorable conditions such as the coronavirus,” Lim at the Institute for Far Eastern Studies said. 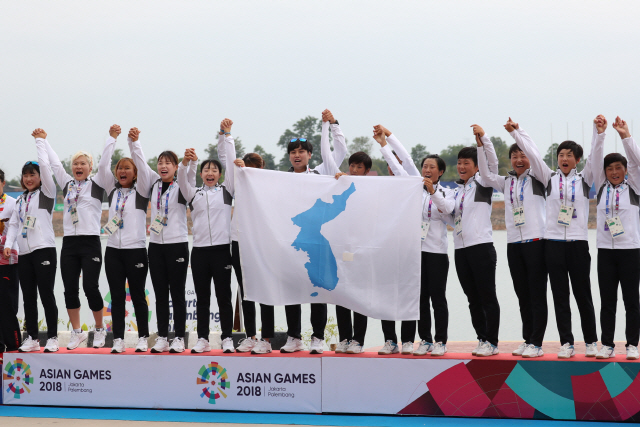 In this file photo from Aug. 26, 2018, members of the unified Korean women’s dragon boat racing team stand on the podium during the medal ceremony after winning gold in the women’s 500-meter race at the 18th Asian Games in Palembang, Indonesia. (Yonhap)

Yang Moo-jin, a professor at the University of North Korean Studies, said that nuclear talks are likely to remain stalled as Pyongyang could fall behind on the U.S. foreign priority list with Washington expected to focus on the aftermath of its troop withdrawal from Afghanistan while the North continues to fight the COVID-19 pandemic.

“North Korea could fall behind on the priority of the U.S., and the speed of the inter-Korean drive could naturally slow down as President Moon Jae-in is nearing the end of his term and the North is faced with the protracted global pandemic,” Yang said.

Yang, however, pointed out that the door remains open for the IOC to reconsider its decision.

“I believe there is still room for the IOC to reconsider its decision if China strongly urges the North’s participation,” he said.

“The participation of the two Koreas in the Beijing Olympics will restore inter-Korean relations and create momentum for denuclearization and peace on the peninsula.”

Despite the latest blow to the peace drive, Seoul officials are also pinning hopes on the ongoing diplomatic endeavors to encourage Pyongyang’s return to dialogue.

Seoul’s top nuclear envoy, Noh Kyu-duk, and his U.S. counterpart, Sung Kim, met twice last month alone to discuss a range of incentives to restart the stalled peace process, such as humanitarian cooperation with the North in areas such as health care, antivirus efforts, sanitation and safe water.

Noh, Kim and their Japanese counterpart, Takehiro Funakoshi, are also expected to meet in Tokyo next week to discuss trilateral cooperation to resume nuclear diplomacy with the North, news reports said.

“The recent whirlwind of diplomacy underscores that efforts among concerned countries for the North’s return to the table are picking up pace,” a foreign ministry official told Yonhap News Agency on condition of anonymity.

The suspension of the North’s Olympic committee is only the latest in a series of setbacks in Seoul’s peace efforts, including Pyongyang’s rejection of calls through recently restored communication lines in protest over last month’s South Korea-U.S. military exercise.