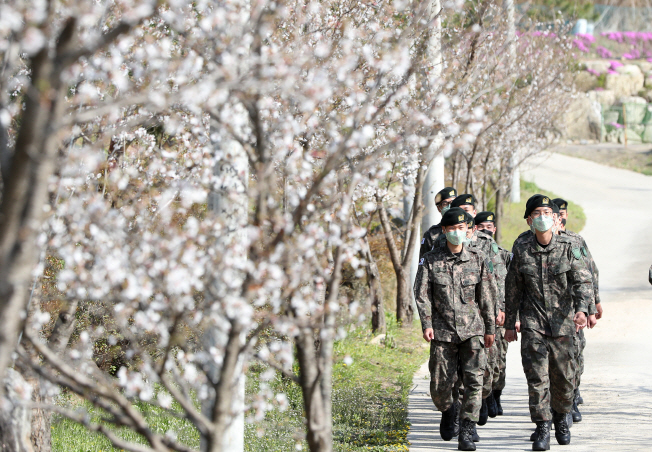 Soldiers walk along a street in the county of Hwacheon, Gangwon Province, on April 24, 2020, after the authorities eased restrictions for enlistees’ off-installation travel. (Yonhap)

SEOUL, Oct. 8 (Korea Bizwire) — A current law banning multiple nationality holders who are 18 years and older from renouncing Korean citizenship unless military service obligations are fulfilled does not conform to the Constitution, the Constitutional Court of Korea said Thursday.

The court said some clauses of the Nationality Act imposing obligations and restraints on multiple nationality holders in their selection of nationality run counter to the principle of the prohibition of excessive restrictions.

The nonconformity decision was reached in a 7 to 2 ruling in response to a constitutional petition alleging unconstitutionality of some Nationality Act clauses, the court said.

The nonconformity decision refers to a system meant to temporarily recognize unconstitutional laws and regulations until their amendments.

Under the Nationality Act, multiple nationality holders subject to preliminary military service in South Korea are required to choose one nationality by March 31 of the year they turn 18 years of age.

Applications for renunciation of Korean nationality also need to be submitted during the period.

If they want to give up Korean nationality after the deadline passes, they must fulfill their military service obligations or wait until age 36 when military duty obligations expire.

The law is intended to prevent multiple nationality holders from abandoning Korean nationality just prior to carrying out their military service after having enjoyed only benefits as a Korean citizen.

The concerned clauses of the Nationality Act will become ineffective if they are not revised by Sept. 30, 2022, in accordance with the Constitutional Court’s decision.

Two similar constitutional petitions were filed in the past, but the court ruled each time on Nov. 30, 2006, and Nov. 26, 2015, that those Nationality Act clauses conform to the Constitution.

The latest petition was filed by a Korean American man born to an American father and a Korean mother.

“There are reasons why it is difficult to expect multiple nationality holders residing mainly in foreign countries to file a renunciation of nationality within the period prescribed by the law,” said the court, adding there are no individual notices on disadvantages associated with the passage of the deadline for nationality selection.

“There may be room for devising ways to exceptionally permit nationality renunciation even after the nationality selection period passes,” the court said.