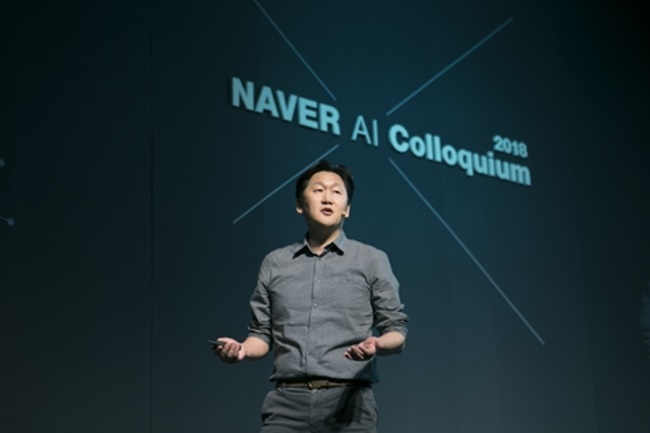 The South Korean web giant made the bold statement citing findings from an internal test during the keynote speech at Naver AI Colloquium 2018 which was held in southern Seoul early Friday. (Image: Naver)

SEOUL, March 30 (Korea Bizwire) — Naver is confident it is winning the battle of AI recognition technology with tech rivals like Google and Apple.

The South Korean web giant made the bold statement citing findings from an internal test during the keynote speech at Naver AI Colloquium 2018 which was held in southern Seoul early Friday.

The study revealed that Naver boasted the highest quality of artificial intelligence voice recognition in Korean, leaving behind the likes of Apple and Google.

The three tech companies fared similarly in terms of voice recognition in the Japanese language.

For speech synthesis, however, Naver earned the highest average score in Korean, English, Japanese, and Chinese, getting the upper hand over Google and Baidu.

On Korean language services alone, Naver scored 4.7 out of 5 points, while the Chinese and U.S. tech mainstays received 3.7 and 2.3 points, respectively.

Naver also came out on top in English and Chinese services, boasting 4.4 and 3.7 points.

The quality of voice recognition was measured based on the response to sentences being read out loud.

Dozens of native speakers of foreign languages were brought in to listen and rate 20 sentences put together by each company’s speech synthesis service.

“We plan to incorporate search and AI service features and give a human interaction-like experience to users. AI speakers WAVE and Friends, which have been released in the Japanese market, have garnered praise from consumers,” said Kim Kwang-hyun, who oversees Naver Search and artificial intelligence projects like Clova.