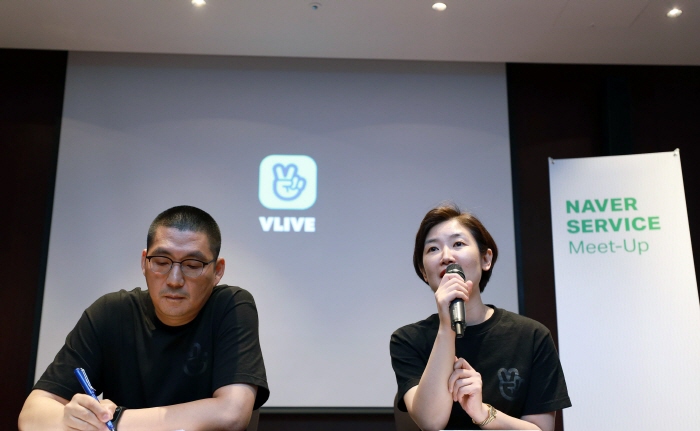 Launched in August 2015, V Live allows K-pop celebrities to broadcast live videos on the Internet and chat live with fans from around the globe. The service has 30 million visitors annually, 85 percent of them from overseas, and is available online, as well as on Google’s Android and Apple’s iOS platforms.

“Naver has advanced related technology so that fans can have vivid contact with stars in the digital environment,” Park Sun-young, co-CEO of Naver V CIC, told reporters in Seoul. “We want fans to better interact with their favorite stars in the virtual space.”

Among the favored features of the streaming services is a big data-based paid membership service, called Fanship, which offers specialized live interactive streaming service for a subscriber’s favorite entertainer.

The company aims to bring in 1 million Fanship members this year, up from the current 220,000, noticeably from four Asian nations — Japan, Indonesia, Thailand, and Vietnam, according to Naver.

“Most of our fans are women in their teens and 20′s and these four countries have very deep-routed fandom cultures,” Park said, adding that the number of celebrities and influencers is expected to triple to 360.

The company also said it is working to achieve streaming of 4K content on mobile platforms following the launch of fifth-generation (5G) mobile network service. Only 720p resolution-based live streaming is available under the mobile environment,

“We think 4K and 8K contents are realistically difficult at the moment as most users in the country are wired for the LTE service and 5G service is not fully supported,” co-CEO Chang Joon-ki said, adding that the service is expected to be available sometime in 2020 or 2021.

Naver has been making various efforts to transmit high-resolution content, such as applying a High Efficiency Video Coding (HEVC) encoder on V Live.

In 2017, Naver invested 100 billion won in YG Entertainment as part of efforts to enrich its content, emerging as the No. 2 shareholder of the talent agency.