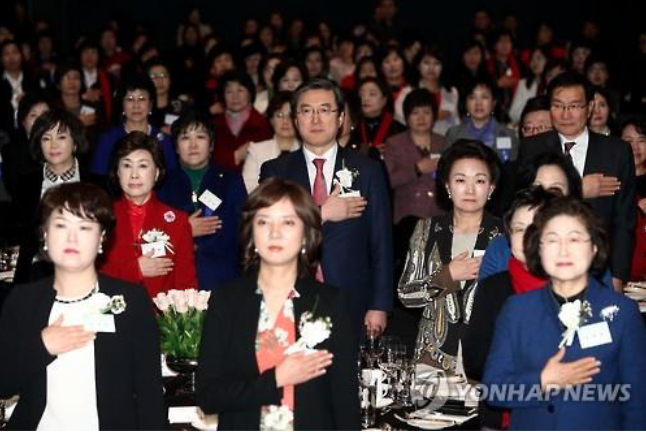 Members of the Korean Women Entrepreneurs Association salute the national flag at a general assembly in Seoul on Jan. 29, 2016. (image: Yonhap)

SEOUL, May 30 (Korea Bizwire) – The No. 1 local portal Naver and apparel manufacturer Hansae Co. were the most women-friendly firms in 2015 in South Korea, according to research results out Monday.

The two companies were jointly rated the top in the research by Meerae Forum and CEO Score that assessed the women-men employment ratio, the rate of increase of female workers, the proportion of female CEOs, pay difference between women and men, and how long women stay with the company. The research covered 243 companies that ranked in the top 500 in annual sales during the 2013-2015 period and had 500 or more employees. Meerae Forum is a social advocacy group, and CEO Score analyzes the country’s top conglomerates.

Allotting 20 points as the maximum for each of the five assessed categories, the researchers gave both Naver and Hansae 77 points, much higher than the average of 52.1 points. Naver got 20 for the proportion of female CEOs and 17 points in annual salary. Seven out of 45 CEOs at Naver were women, accounting for 15.6 percent, way above the average of 2.6 percent.

While Naver has held on to the No. 1 ranking for the past three years, Hansae climbed up the ladder from 6th.

In an overview, the research results showed that the gender gaps in the period of employment and wages were narrowing. Over the past three years, the difference in the length of employment fell from 5.1 years to 4.8 years, while the gap in annual pay also fell from 3.19 million won to 3.17 million won.