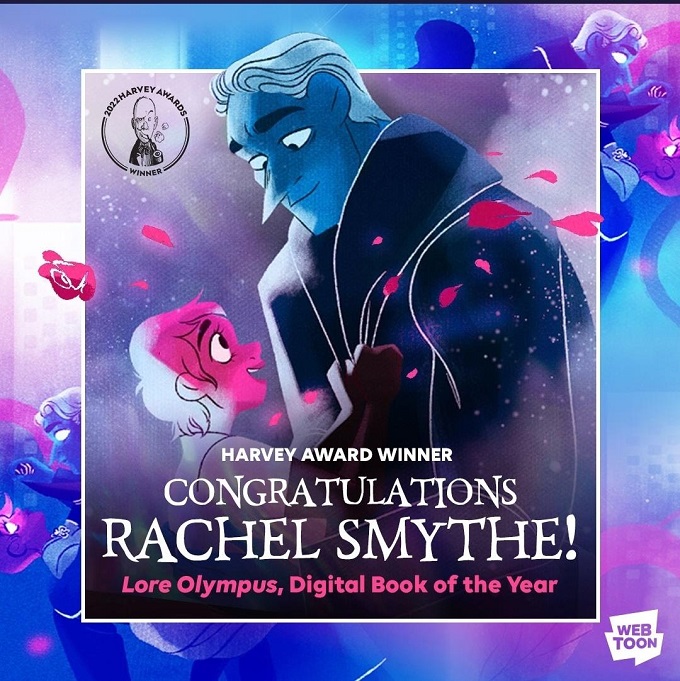 This image was captured from the Twitter account of Rachel Smythe, author of the romance webcomic “Lore Olympus.” (Yonhap)

The webcomic series, created by New Zealand artist Rachel Smythe and published by Webtoon, the digital comics platform operated by internet portal Naver, was named the Digital Book of the Year for the second year in a row, at the 2022 Harvey Awards, according to the event’s official Twitter page.

The Harvey Awards are one of the comic industry’s oldest and most prestigious awards.

“Lore Olympus” became the first title to be honored for the second consecutive time in the Awards’ Digital Book of the Year category, which has been awarded since 2018.

Launched in 2018, the series is a modern retelling of the relationship between the Greek goddess Persephone and god Hades. It has garnered 1.2 billion views since it was released on Naver Webtoon’s platform for amateur creators.

In July, the series won the Best Webcomic prize at this year’s Will Eisner Comic Industry Awards, founded in 1988 and regarded as the comics industry’s equivalent of the Academy Awards.

“Hooray! Thank you so much to everyone for all the support. I feel so lucky to have received this award for the second time,” Smythe said on Twitter.

South Korean cartoonist Keum Suk Gendry-Kim’s “The Waiting” about families forcibly separated during the 1950-53 Korean War was nominated for Best International Book of the 2022 Harvey Awards, but the honor went to Mirka Andolfo’s “Sweet Paprika.”

Kim won in the same category for “Grass,” depicting the life of victims of Japan’s wartime sex slavery, in 2020, becoming the first Korean to win a Harvey award.