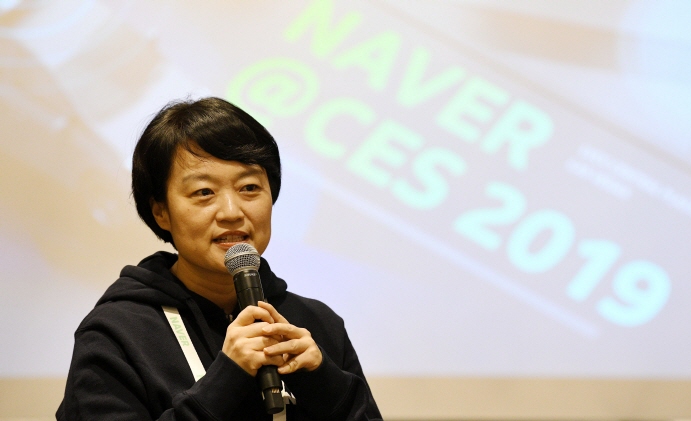 SEOUL, Jan. 9 (Korea Bizwire) – Han Seong-sook, CEO of Naver Corp., a South Korean online search portal, said Naver’s success over the last 20 years is based on “taking a path different from others.”

At a press conference held in Las Vegas on Monday, Han said that Naver created the search engine, Line mobile messenger, and other services “straight from thin air”.

She said that Naver has to compete with Google and Facebook not because it wants to, but because “it has no choice.” “We get asked a lot of questions on the services that we don’t have, that Google and other companies have.”

Han said she marveled at Google Maps for its quality after using it in Las Vegas, saying that new approaches can be developed to “better compete with Google.”

“The mapping platform is at the core of our competitiveness,” said Seok Sang-ok, head of Naver Labs Corp., a R&D subsidiary of Naver. “The platform also serves as a foundation to efficiently create robot technologies.”

Baek Jong-yun, who is in charge of automatic driving technologies at Naver Labs, said he came to Las Vegas “to find good partners by creating outstanding xDM platforms.”

On this year’s CES, Han said that this year will mark the beginning of technological platforms needed to connect online and offline environments.

“Automatic driving and robots are vital to integrating machines and space,” Han said. “This is a milestone for us at CES, telling the world about our intention to develop fundamental technologies to make that happen.”

At this year’s CES, Naver showcased automatic driving systems and indoor cartography robots, as well as the xDM platform, a location and transportation solution.