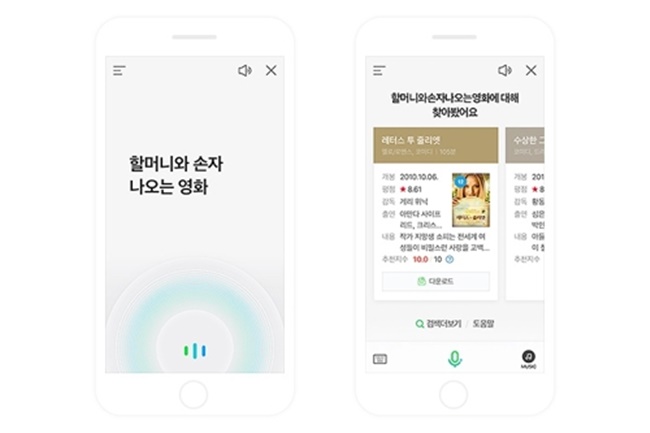 According to Naver on Friday, the new Clova platform-based voice search service is now available on the web portal’s mobile app. (Image: Naver)

SEOUL, Dec. 22 (Korea Bizwire) – Naver has released a new AI-based voice search service that can understand the context behind questions.

According to Naver on Friday, the new Clova platform-based voice search service is now available on the web portal’s mobile app.

The new voice recognition service is based on CLOud Virtual Assistant (Clova), which was first unveiled by Naver at Mobile World Congress this year and drew attention for its capability to understand the context and deeper meanings behind questions asked by users.

For instance, when users ask questions like “Recommend the best restaurants in Nonhyeo,” or “Where are the parking lots around Namdaemun Market,” the voice search will show more optimized information, instead of simple search results.

To put it more simply, it’s a voice recognition service like Samsung Galaxy’s Bixby incorporated into a search bar.

The service comes with a voice activation feature, allowing users to launch an inquiry by saying simple words like, “Annyeong, Naver,” or “Hello, Naver,” instead of having to click on an icon each time.

In tandem with other Naver services such as AI translation service Papago, and Naver Music, the voice search service allows users to search for not only keywords, but also issue commands for translation and music search, simply by saying, “Translate this sentence into English for me,” “Play some BTS songs,” or “Show me trendy handbags.”

“Without having to type on the keyboard, the demand for convenient voice search services is continuing to grow,” a Naver official said.

“Given our years of research on AI communication technology, which we have incorporated into our search service, we are hoping for a warm reception,” the official added.

Naver’s new voice search service is currently only available for Android smartphones, with plans to introduce another version for iPhones in the future.

AI-based voice search is one of the fast emerging fields of investment among both South Korean and international IT companies, as it can be used in a number of devices ranging from smartphones and AI speakers to smart vehicles.